Students of Kumasi Academy, a mixed senior high school at Asokore Mampong in the Ashanti Region, have demonstrated against school authorities over what they term as mysterious death of students.

The students, who nearly clashed with police officers maintaining law and order at the school on Friday evening, are demanding to go home following these deaths.

According to information available to Citi News, three students who were sick reportedly demanded exeats last week, and after they were granted, they all died within two weeks at the Hospital.

The main entrance to the school was blocked with several people including parents and townsfolk demanding that authorities open the gate for them to take their wards home.

One of the students, who helped convey some of his ailing colleagues to the hospital, narrated what transpired to Citi News, “It all started last week Wednesday when we heard that one of our guys, a form one student is dead. The next week, also on a Wednesday, we also heard of the death of another form two student, and on Thursday, the following day, we heard another student had died bringing the number to three. This morning we heard about the death of another student, and also this evening we also heard another student is dead. So the students decided that if this is happening, the school should allow us to go home whether for prayers or any kind of protection. From the look of things the school hasn’t thought of allowing us to go home so we had to demonstrate for the authorities to know how serious we are about what is happening.”

According to the student who wished to remain anonymous, those at the Hospital are recuperating.

He alleged that, the school has experienced about six mysterious deaths, which often occur every third term, hence students feel unsafe to stay in the school.
According to him, the students are even more scared because this time round, the deaths are happening in the second term, and management of the school appear unconcerned.

He even revealed that the Headmistress of the school is also currently unwell and on admission.

“These deaths have been occurring mostly every third term. But the reason why the students are furious is that, this time it is happening in the second term and administration is not saying anything about it. As I speak to you right now, the Headmistress herself is seriously sick and in the Hospital. So we have spoken to the Assistant Headmaster of administration and the Senior House Master, and they are saying that they may close down the school for the students to go home, so probably by tomorrow (Saturday) they will allow the students to go home.”

“I have personally witnessed about five students who have fallen sick seriously and have been taken to the Hospital. But I have also heard of the death of about six people.”

Meanwhile Citi News gathered that, the number of people dead from the school include two matrons.

Some of the parents who had gathered in front of the school gate expressed disappointment that the school authorities failed to come out and speak to them on what exactly was happening, and whether their kids were safe.

“Are the police officers waiting for chaos before they bring more people? The man should come and speak to us the parents so we have our peace of mind. I have two children in there and I can’t be feeling good” an angry parent said.

The Assistant Headmaster of the School in charge of Academics, Ernest Wiafe, said the students became agitated and were becoming chaotic following rumours that another student had died after supper.

“…So in the process, there was a bit of stone throwing and some noise; and so we had to call the police who were close and they came with a little bit of reinforcement. So as you can see the situation has normalized. Unfortunately, some media houses presented a completely different story, that’s why you see a few parents outside the school trying to get their wards back home. But let me confirm that our students are all safe and they are sleeping. So the parents would have to leave and find a better time to come back and find out things for themselves.”

“We have two form two boys and one form one student who died. As I speak to you, we don’t know the cause of death. However they didn’t die in the school. They fell sick, reported to the sick bay, they had first aid, and the nurses sort exeat for them; their parents took them to the Hospital and they passed on. They all died on different days within a span of about fifteen days. These are isolated cases. For a very long time we haven’t recorded such situations, these are unfortunate times; we have a student population of over 2,800. In the case of the last person who died, he took an exeat, went home and the father took him to a Hospital, he was treated and discharged; later in the day he felt sick again and was taken to Tech Hospital and he died.” 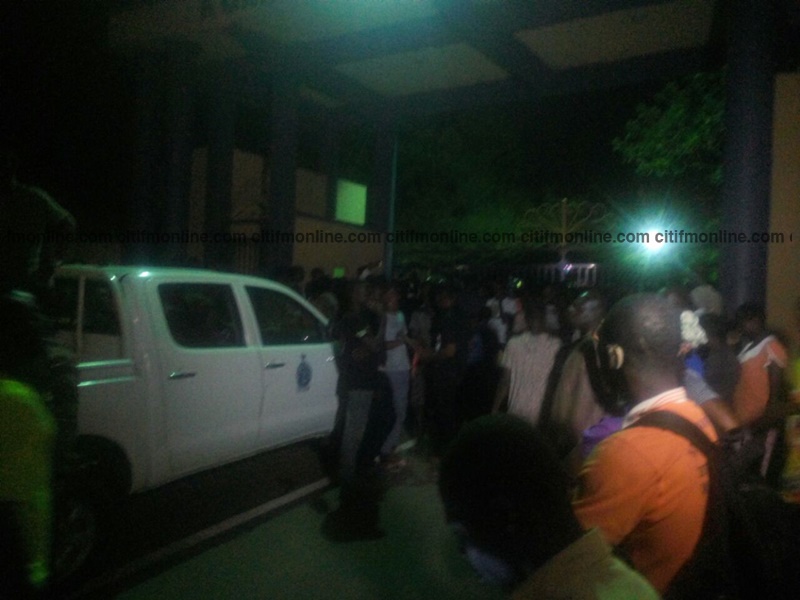 He said the deaths cannot be linked to food poisoning since the entire student population ate the same food with the deceased persons.

“Nothing like food poisoning; Mind you we have a boarding population of a little over 2,100 who all take food from the dining hall. There’s also a canteen where the students go to buy food from. So if it were to be a case of food poisoning, you could have imagined the number of casualties. So we have no doubt at all, that these are students who had ailments and unfortunately passed on. However investigations by professionals are still ongoing and I believe we will know everything.”

According to Mr. Ernest Wiafe, the matter has been reported to the municipal health directorate, which has dispatched officials to the school to collect vital information, and also do same at the hospitals where the students died, to ascertain the cause of death.

I was ‘assaulted’ at Flagstaff House – Rachel Appoh