The Eastern Regional Minister, Eric Kwakye Darfour, has promised to ensure that the University of Environment and Sustainable Development at Somanya in the Eastern Region, is completed by the Akufo-Addo government.

He said “the university is a very good initiative that will benefit people of the Eastern region and other regions in the country as students residing in other regions will also apply for admission to be enrolled in the university. I therefore pledge to ensure its speedy completion and full enrollment in no time because education is very dear to my heart.”

[contextly_sidebar id=”LeDQX1DD3G6IzZvV6bmKUOXn44qYAFCB”]The Minister made this statement in his first meeting with the staff of the Eastern Regional Coordinating Council in Koforidua.

Eric Kwakye Darfour called for unflinching support from the staff to make sure that programs and policies of the central government are implemented successfully.

The Eastern Regional Minister told the workers to make sure that their partisan affiliation does not affect their work.”

“I admit we cannot all belong to the same political party; but for the sake of the development of our country and the Eastern Region let us put aside our differences and work towards a common goal.” 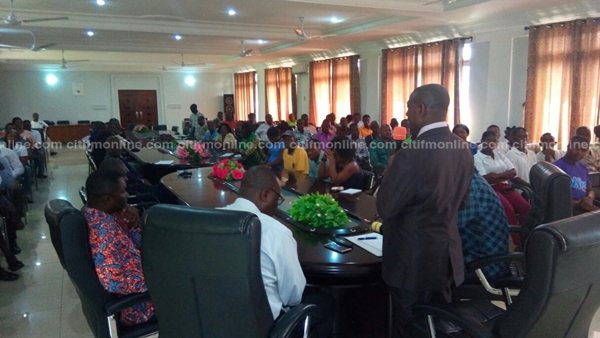 For his part, the Chief Director of the Regional Coordinating Council, Mr. Randolph Korzie Sambo, assured the minister of the staff’s support to deliver on his mandate and to realize his vision for the region.

Power situation will be normal from today – Boakye Agyarko