According to the Director for Natural Resources at the Environmental Protection Agency (EPA),  Carl Fiati, if government does not curb illegal mining, Ghana may soon lose all of its water bodies.

“We anticipated this problem long time ago that it’s going to come a time when we continue the way we are going as a country, we are going to destroy all our water bodies and import water for drinking,” Mr. Fiati added.

[contextly_sidebar id=”myrf2lXbUmVtEDHlw9BsOpaxmzfGK0SJ”]The EPA director made the claim on the Citi Breakfast Show on Tuesday following reports of closure of the Abessim water treatment plant in the Brong-Ahafo Region.

The Ghana Water Company has said the plant had to be shut down because of the reduction in water levels in the Tano River caused by illegal mining.

The Kyebi Water Treatment plant was also shut down in August 2016 because the water had been rendered untreatable by galamsey.

The galamsey menace continues to serve as a threat to water bodies, aquatic life and agriculture in the country, however several efforts by government including setting up an inter-ministerial taskforce in the previous administration proved futile.

Mr. Fiati explained that the galamsey problem is a very complex one and government must thus “develop a national will to address it.”

No national will in solving galamsey

“It is not a problem EPA alone can solve. The mandate of the EPA is to co-manage the environment so we do it in partnership with all the other sectors. But when it comes to galamsey, it looks like there is no national will to deal with it. We appear to value the gold more than the water we drink and the land on which we farm and our forest. So we have allowed people to go freely and degrade.”

Mr. Fiati observed that in other countries mining areas are blocked “and people only go in when government opens up an area for mining.”

“In this country people can go anywhere and start mining. I am personally unhappy with the situation, I think government must change its way of doing things—get mines closed…so that mining can be properly regulated. That is what is done elsewhere, nobody jumps anywhere and mine it is illegal so if somebody is doing illegal mining he should be arrested and prosecuted,” he added. 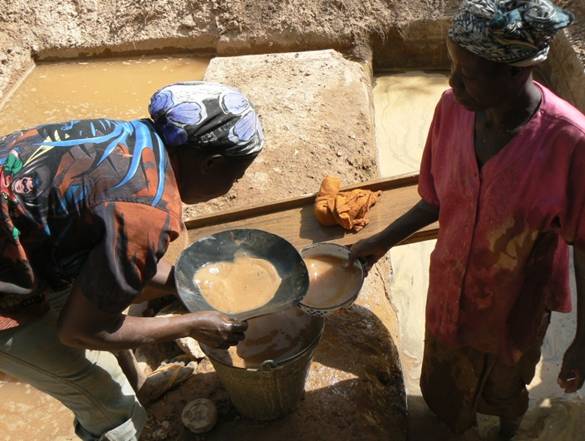 When asked how the dangerous effects of galamsey could be resolved, Mr. Fiati said the only way is to arrest, prosecute and jail illegal miners to serve as deterrent to others.

“EPA has specific procedures and processes to ensure that our registered mining entities do their mining activities in an environmentally friendly way. So those that are known to us and are registered with us we regulate, but there are several more people who have gone into mining without the requisite permit so as to do the mining the right way and these people are the illegal or galamsey mining. These people are scattered all over. EPA alone cannot deal with these people. This people are armed, EPA is not armed so we’d need the security agencies, the Ministry of Lands and Forestry, minerals commission and other to work together.”

“EPA cannot bypass these processes and procedures and pretend we are regulating galamsey. We have to make people realize that galamsey is illegal and punishable. And the way to do it is to arrest, prosecute an if possible jail those who do galamsey because the effect of galamsey on the population and the future of this country is far reaching, we cannot compromise with it,” he added.