The former Member of Parliament (MP) for Ningo-Prampram, Enoch Teye Mensah has withdrawn his bid to represent the Greater Accra Region at the Council of State.

The reason for his last-minute decision is “personal”, a letter written by him on Wednesday [15th February, 2017] said.

The NDC executives of the Ningo-Prampram constituency expressed regret about the former MP’s decision, saying it would send wrong signals to the grassroots members of the party that he has joined the New Patriotic Party.

The withdrawal letter, addressed to the regional electoral director of the Electoral Commission, sighted by citifmonline.com said;

“I wish to inform you of my decision to withdraw from the council of state slot for the Greater Accra Region. My reason for withdrawing from the race is personal. Thank you for your kind consideration.” 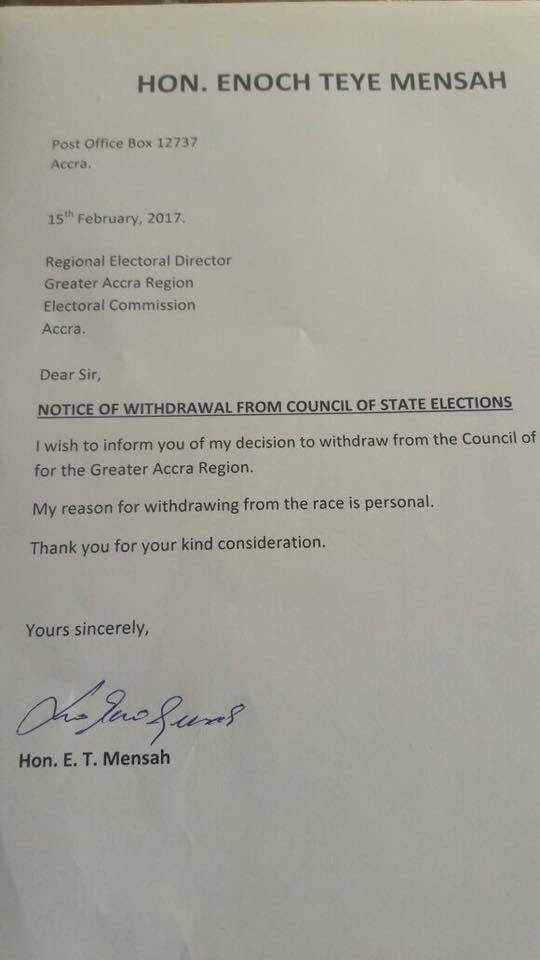 Meanwhile, the Electoral Commission of Ghana says it has made all the necessary arrangements to hold a smooth Council of State election today [Thursday, February 16, 2017].

About 430 voters across the country are expected to cast their ballots to elect their respective regional representative on the Council.

A total of 113 candidates between the ages of 23 and 84 are contesting in the election which will take place in all regional capitals across the country.

The poll starts at 10am today and is expected to end by 2pm.

‘About the Council of State’

The Council of State consists of one representative from each region of Ghana, elected in accordance with regulations made by the EC under article 51 of Ghana’s constitution, by an electoral college comprising two representatives from each of the districts in the region, nominated by the District Assemblies in the region, and eleven other members appointed by the President.

President Akufo-Addo earlier this week announced the names of his 11 nominees to serve in the Council accordance with Article 89 (2)(d) of the constitution.

Notable among the appointees are the former Metropolitan Chief Executive of the Accra Metropolitan Assembly, Stanley Nii Adjiri Blankson and a former President of the Ghana Bar Association, Sam Okudzeto.

Aside these 11 appointees, the Council of State must include a former Chief Justice, a former Chief of the Defence Staff and a former Inspector General of Police and the President of the National House of Chiefs per Article 89(2)(a)(i) of the constitution.

Buipe bridge to be closed for repair works