President Nana Akufo-Addo has outlined his government’s vision for boosting agriculture, which he says requires a focus on modernized agriculture to enhance efficiency with the help of local government and chiefs.

Speaking at the 68th Annual New Year School at the University of Ghana today [Monday], he noted that agriculture remains the anchor of the economy, but lamented the decline of the sector in recent years.

“…Growth in this sector [Agriculture] has declined dramatically. Food is unnecessarily expensive in a country that is blessed with fertile land. Our production methods are not modern and income levels of farmers and fisher folk remain low,” he stated. 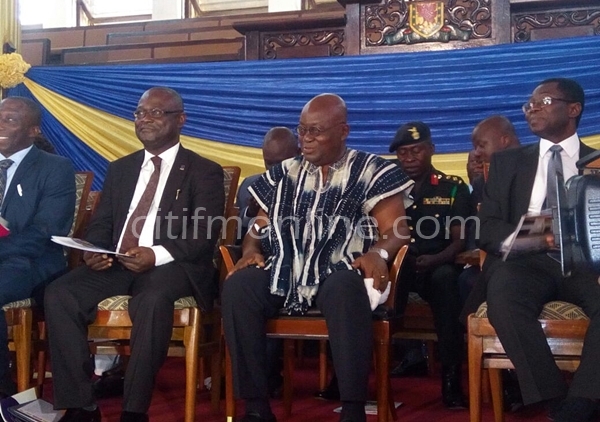 This decline as made the “sector unattractive to the youth as a viable means of livelihood,” President Akufo-Addo stated.

However, President Akufo-Addo indicated that, his administration’s vision for the next four years, “is to modernize  agriculture, improve production efficiency, and achieve food security and profitability for our farmers.”

“District assemblies and traditional authorities will be assigned specific roles in agriculture development and we will adopt policies specifically targeted at supporting women in agriculture,” he added.

‘Planting for food and jobs’

Government is also set to launch a campaign themed ‘Planting for food and jobs’.

Citi News’ Caleb Kudah reported that, the Minister for agriculture nominee, Dr. Owusu Afriyie Akoto, made this known at the New Year School.

According to Dr. Afriyie Akoto, the programme, which is scheduled to take off in March 2017, the start of the next farming season, will create over 750,000 jobs for the youth.

Government’s plan is to have the programme make use of information technology to drive national food security and ensure improved income for farmers.

Government also plans to give incentives to prisons, universities and state institutions to have their own farms.

Number of banks to hit 37