The Speaker of Parliament, Professor Mike Oquaye, has approved the setting up of a five-member in-house committee, to investigate the corruption allegations levelled against some leaders of the House concerning the approval of the Energy Minister, Boakye Agyarko, after his vetting.

Speaker Oquaye upheld a proposal by the Majority leader, Osei Kyei Mensah-Bonsu, for the formation of the Committee despite a call for the matter to be only referred to Parliament’s Privileges Committee.

[contextly_sidebar id=”ZyKqf1VW6xudi2TKbpt2a5hV266SgLzj”]The Effiduase/Asokore MP, Nana Ayew Afriyie, had made the Privileges Committee proposal on the floor of Parliament today  [Tuesday] but the Speaker indicated that the corruption allegations stretched beyond matters of privileges.

He further made reference to Parliament’s Standing Order 191 which indicates that the House may at any time, by motion, constitute a special committee to investigate any matter of public importance.

Speaker Oquaye noted that the Standing Order 191 “should also put to rest whether Parliament can inquire into matter A or matter B anytime in the history of this Republic. Parliament, as the representative of the people, is empowered inherently and is recognized in this particular part of our Standing Orders to inquire into any matter from archaeology to zoology, within the republic of Ghana.”

Mr. Agyarko has been accused of attempting to bribe 10 Minority members on Parliament’s Appointments Committee, with GHc 3,000 each, prior to his nomination being approved.

This was followed by a petition to the Speaker by three Minority MPs namely Mahama Ayariga, Samuel Okudzeto Ablakwa, and Alhassan Suhuyini.

The three have confirmed that the alleged bribery indeed occurred, hence their decision to ask for investigations, despite the denial by Minority Chip Whip and MP for Asawase, Muntaka Mubarak. 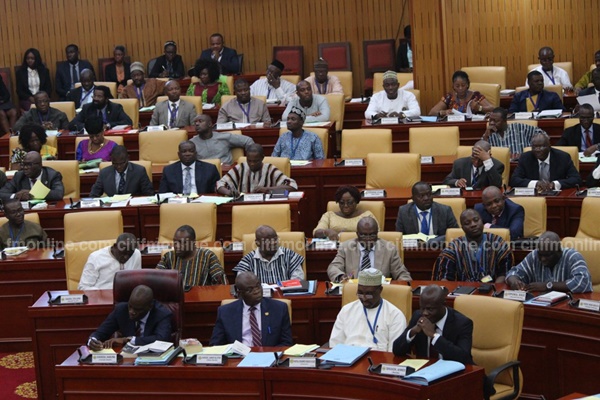 The committee constituted to look into the matter has thirty days within which to present its report. It is to be chaired by Former Attorney-General and MP for Essikado-Ketan, Joe Ghartey.

The four other members are MPs Ben Abdallah, Ama Pomaah Boateng, Magnus Kofi Amoateng and Hon. B.T. Baba. The decision to form the ad-hoc committee, was approved by the leadership of both sides of the House.

Prior to the setting up of the committee, the Majority Chief Whip and Chairman of the Appointments Committee, Joe Osei-Wusu, who stands accused for his role in the bribery scandal, requested permission to go to Court, to enable him clear himself of the allegations.

The Speaker cautioned members of the House not to interrupt with the work of the committee, and must refrain from making comments publicly that will affect the process.