The National Democratic Congress (NDC) defied police and agreed arrangements to march in proximity to the premises of opposition New Patriotic Party (NPP) Flagbearer, Nana Akufo-Addo, to instigate clashes between supporters of the two parties.

This is according the NPP in the Ayawaso East constituency, who laid blame for the widely criticized violent clashes in front of the opposition leader’s residence solely at the feet of the NDC who were on a regional health walk.

[contextly_sidebar id=”QFeyT8rzhaWrprVFjaSBI2slmz5IlhXh”]The NPP contended that the “attack was deliberate and well planned by some leading members of the NDC.”

The Police are investigating the incident but in the meantime, both parties have blamed each other for a gunshot heard at the place that sparked the clashes.

But at a press conference today [Thursday], the NPP’s Ayawaso East Secretary, Nana Obuoba Kissi explained that the NDC group had no business being in that area at that time.

“Our question therefore is: what were the NDC and its supporters doing at Nima West? This shows clearly that they have defied the rules of engagements laid down by the police.”

Mr. Kissi further described the NDC’s “unprovoked” actions as an attempt “to create fear and panic in the youth of the constituency who vow to vote against the incompetent NDC.”

Police not to blame for clashes

President John Dramani Mahama has since blamed the Police for the clashes that saying he thought the Police at Nima should have been better briefed knowing that this group was passing through.

In his first comments on the incident, he suggested that the police should have taken the appropriate safeguards so there would have been no opportunity for the clashes. 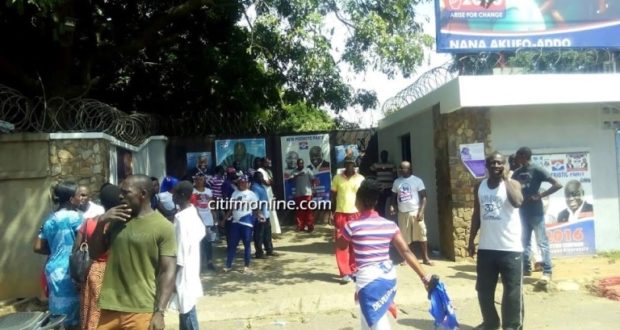 But the Ayawaso East NPP rubbished President Mahama’s comments and instead called on him to look within his own party for blame.

“We were shocked to therefore hear the President blame the police of this barbaric act. We here say to the president to blame his poor organizers, incompetent executives and supporters who rushed to destroy valuables instead of sticking the laid down routes,” Mr. Kissi said.