Afanyi Dadzie writes: Half a loaf is not better amidst plenty bread

If you deserve a full loaf when bread is available in abundance, and yet you are given half a loaf, can that still be better than none? I certainly don’t think so. You have to demand for your full loaf.

But you see, like the Akan saying ‘If you fail to speak about your haircut; you will end up with a bad cut.’

I have come to a conclusion that a sizable number of Ghanaians, have come to accept just anything at all thrown at them by our self-centered and greedy politicians.

And it really breaks my heart to see that the very people who are being short-changed, are largely blind to their sad situation – and so even for the half loaves, they seem very content with it in the midst of plenty.

And this is why the Ghanaian politician is emboldened to continually give us the left-over after they have enriched their lives and that of their families and cronies. Then we behave like children excited after being given toffees in the kindergarten; and clap for them.

I just can’t imagine that after more than fifty years of independence with the abundant resources available to this country, I am supposed to heap praises on the government merely for building a flyover over a smelly open drain (Odaw River) to ease traffic congestion. Hell No!

I haven’t traveled beyond the borders of this country; but I have read and viewed; and so I know that per global standards, our flyover is not a magnificent architectural project.

And it cannot pass for a tourist attraction site merely because of a Fountain with Dr. Kwame Nkrumah’s statue and the lighting at night – Let’s stop making fun of ourselves in the eyes of expatriates in this country – it’s embarrassing; we are not in the stone age; and Ghana is not far away from the world to have different standards – we are in a global village. 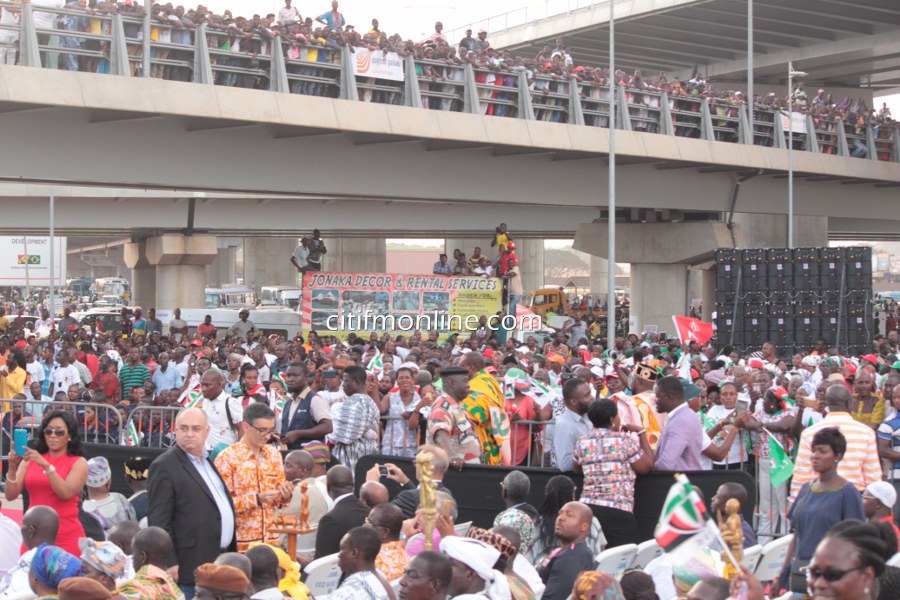 Yes – this may be news for some Ghanaians because they’ve not had exposure to such things, but seriously, all that this project will do; is to make movement a little easier, and perhaps an insignificant impact on productivity.

But what is even more shocking, is that for the purposes of political convenience and party affiliations, even people who have traveled far and wide, and are supposed to be exposed and enlightened; are behaving just as the not-so-exposed people.

And the worst of it, is the dishonesty from the politicians themselves; who have excess exposure and a perfect picture of monumental projects globally; and yet put up simple things to enable them siphon some of the money – and shamefully turnaround to brag about them.

It is a good project just for the purpose it was made for; but it is not extraordinary; and it’s not a monumental achievement just like the Tetteh Quarshie Roundabout and the George Walker Bush Highway; which has taken human lives needlessly – because pedestrians’ safety wasn’t factored into that project.

We haven’t built our first ship, neither have we built a Helicopter or an Aeroplane – it is just a simple flyover which has been built with a loan that will be borne by the tax payer’s sweat. So what’s all this fanfare if not merely for the purposes of convincing voters? We may as well declare a holiday when we achieve any major achievement in science and technology.

Let’s stop the mediocrity; and demand for higher standards from our politicians else they will take us for fools forever. Like the Akan adage ‘If you never express your hurt; they will never stop hurting you.’

We haven’t been angry enough as a people; we must not just walk to the polls every four years; come back home, and fold our alms; whiles they do what they please.

Some say the politicians deserve commendation because after all, Rome wasn’t built in a day.

Well; that’s true, but at least, Rome was built every day till it got to its magnificent and monumental state. Yet, what do we do every day? We waste all the time we have to build siphoning the very resources that is building ‘our own Rome’.

How then do we finish building when the building materials get stolen along the way?

And again, even though Rome wasn’t built in a day, like the parable of the talent in the Bible, to whom much is given; much is expected.

The many model countries that we make references to today including Rome; do not have the significant amount of resources that we have had, and continue to have. And yet, they have progressed rapidly and better than us.

I don’t even want to talk about suggestions  that the project cost may have been bloated for the purposes of kickbacks and the likes. But inasmuch I do not have evidence on that, I know it’s a possibility in this our corruption riddled society.

Some of you Ghanaians can choose to settle for less, and allow the greedy and selfish politicians to find it convenient to take you for granted by allowing them to engage in such trivialities on election days, just to woo the ‘weaker minds’ as President John Dramani Mahama reportedly once said.

Yes – they are greedy and selfish; and that’s a fact. I have concluded, that the problem with leaders on this continent, is not the lack of knowledge or the even the will to implement the desired change – greed and self-centeredness is our bane.

But for me, I will not confuse the truth with the opinion of the majority. And like Mahatma Ghandi once said ‘Even if you are a minority of one, the truth is the truth.’

A friend on Facebook, who found the Interchange project praiseworthy and surprisingly described it as victory, asked me what in my view will constitute a transformational project, and this was my response; “I am waiting for the day I will be in dire need of health services and I can call an ambulance to pick me safely to the Hospital; I wait for the day I won’t have to queue in pain at the hospital to get care because of huge numbers and less doctors; I wait for the day this country will manage it resources well enough to pay unemployment benefits and cater for the vulnerable effectively; I wait for the day factories will be built to add value to our raw materials and give jobs to the jobless – and decisions will be taken against the high levels of importation; I wait for the day it won’t take me long hours to get a mere passport in my country or pay bribe to get it; I wait for the day monies will not be sunk in building roads that last for few months only for us to rebuild and waste money, the list goes on and on; I can’t settle for less in a land of plenty – I am not saying one gov’t can do all, but there must be serious commitment enough towards these things.”

We still have a long way to go in terms of infrastructure that should be equally scattered across our country; but the pace at which we are moving is extremely slow considering how old we are.

If the blatant and cruel siphoning stops, we can achieve more than enough and make our nation great and strong.
–
By: Ebenezer Afanyi Dadzie/citifmonline.com/Ghana
[email protected]