According to the Ghana Integrity Initiative (GII) which made the claim, Dr. Bawumia’s borehole he constructed for the Amedzofe College of Education (AMECO) was a “last minute” move “aimed at securing votes.”

Dr. Bawumia in June 2016, cut the sod for the construction of a mechanized borehole for AMECO in the Ho-West District of the Volta Region.

[contextly_sidebar id=”idbYs5gseWo0wQHWJesDjgdMWYbklYCS”]The NPP running mate is said to have initiated the project in fulfillment of a promise he made to the school in a bid to address the perennial water problem confronting the institution.

But GII in a report released on Friday dubbed: “Reducing abuse of incumbency and electoral corruption in Ghana’s election 2016” said the move clearly was to secure votes.

“The Coalition also observed an incident during this monitoring period, where the Vice Presidential Candidate of the NPP, Dr. Mahamadu Bawumia commissioned the construction of a mechanized borehole for the Amedzofe College of Education (AMECO) in the Ho-West District of the Volta Region. This incident can be described as an act of “providing last minute infrastructure, construction, etc. and the provision of other services to communities aimed at securing votes,” the report added.

GII in the report also accused President John Mahama of abusing incumbency and indulging in electoral corruption, for distributing outboard motors to Fishermen during his campaign tour of the Western Region in August. 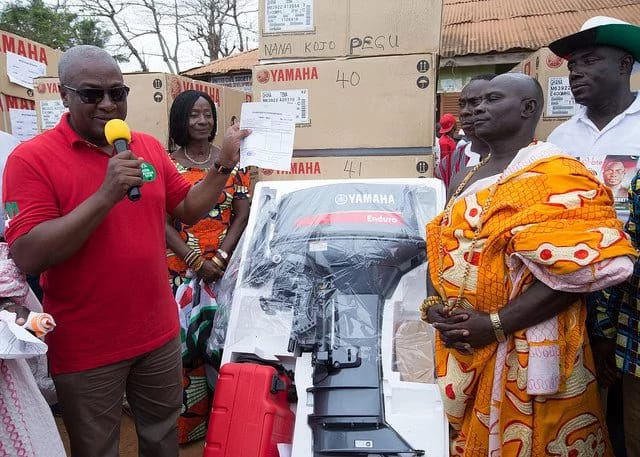 “On August 16, 2016, during President John Mahama’s publicly announced four-day campaign tour of the Western Region, outboard motors and pans were distributed to fishermen in Sekondi.   On 17th August, 2016, the Spokesperson of the NDC Campaign, Mrs. Joyce Bawa Mogtari indicated…that the distribution of outboard motors were part of an on-going government intervention. She stated that the items were purchased with state funds. The Coalition officially considers this particular incident as unfortunate and a demonstration of the incumbent government engaging in acts that constitute abuse of incumbency.”

Speaking on Eyewitness News, Mr. Batidam, who claimed he was not privy to the President’s move, said “the outboard motors that were distributed were actually included in government’s budget for the year.”