The government of Gabon shut down the internet on Wednesday (Aug. 31) following the announcement president Ali Bongo was re-elected by a slim margin for a second seven-year term in office.

The move showcased the tensions already gripping the country, with the capital Libreville experiencing a night of violent clashes, looting and arrests, while the main opposition candidate, Jean Ping, said he feared for his safety and went into hiding.

Gabon Telecom, the country’s largest telecom company, which also routes 91% of the country’s IP addresses, shut down the internet around 9 pm local time, according to Doug Madory, the director of internet analysis at Dyn.

The move, he says, left only a few companies online that utilize alternate means of connectivity, such as satellite communications. The cutoff comes amidst reports of slow internet bandwidth and limited access during the weekend.

“Time and again, we’ve seen that internet shutdowns serve as early warning mechanisms of human rights violations, and Gabon may prove no exception,” Deji Bryce Olukotun, the senior global advocacy manager at the digital rights advocacy group Access Now, said. “Authorities in the country should turn the internet on as soon as possible.” 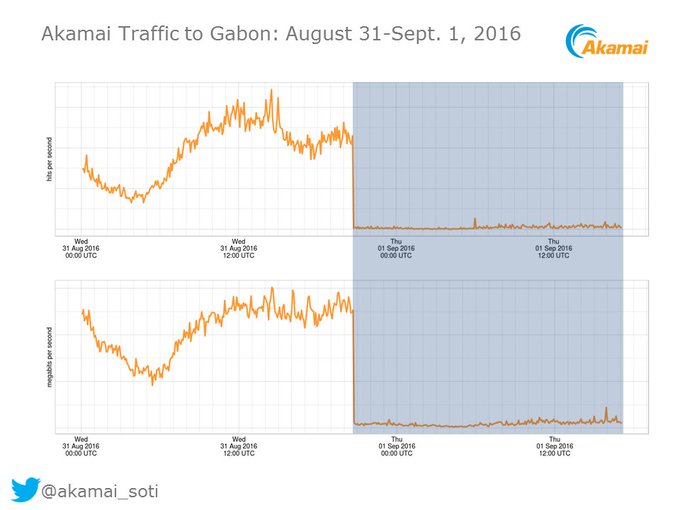 Gabon is the latest African country to shut down the internet as post-election tensions grow in the country. Uganda, Burundi, Ethiopia, Chad andRepublic of Congo are all examples of countries that blocked internet services during recent polls. Ghana’s police chief was also sharply criticized earlier this year for suggesting that social media platforms be blocked during the upcoming general election in December.

Gabon’s results were released late on Aug. 31 night, a day late, prompting clashes. Ping’s headquarters were bombed, and protestors broke down the national assembly’s gate and set it on fire. At least two people were killed according to the opposition, and police arrested at least 1,000 people during the unrest.

The president’s office has since accused Ping of coordinating and planning the clashes, and asked him “to call off his thugs and stop vandalizing the city.”

Speaking to the press on Thursday (Sept. 1), Bongo reiterated his distress about the election riots. “Democracy doesn’t sit well with self-proclaimed victory, with groups formed to cause destruction,” he said. “Democracy is not compatible with an attack on [the building] of national TV and on parliament.”

Despite the internet shutdown, Bongo and Ping were both able to use social media platforms on Sept. 1 to call for unity, upholding the rule of law, and to pray for those who were killed, injured or jailed during the clashes.