The increasing rate urbanization pose enormous risk to output growth on farm and non-farm enterprises in rural Ghana not to mention the increased economic burden on aged rural women most of whom are above 40 years.

Admittedly general population movement across Ghana over the last decade has been from urban (excluding Accra) to other urban areas (2000: 14.5%; 2006: 19.1%; 2012: 23.2%). This notwithstanding, the increasing trend in rural-urban (Accra-inclusive) migration (2006: 6.6%; 2012: 9.3%) raises pertinent questions about general youth unemployment and underemployment in agriculture.

Unlike the urban areas where majority (30.9%) of employed persons aged 15yrs+ work in wholesale and retail trade (Service sector), agriculture employs 77.1 percent of labor force in the rural areas. Undoubtedly, demographic shifts in rural population would not only affect gender composition of farm hands but also the mean age of persons available to do farm work. Implications for productivity is dire. 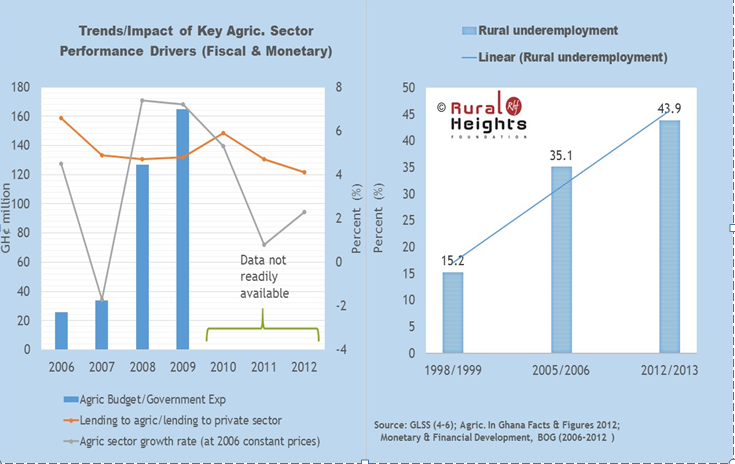 There is evidence to suggest that the youth (15-34yrs), who form the largest constituents of in-migrant population (40.7%) are more likely to relocate to Greater Accra and other urban areas in search of decent employment. But is social mobility the only reason why majority of the youth are relocating? What does it mean for gender vulnerability in their locations of origin? Are there any implications for inclusive growth and rural development? These are the issues that this policy brief seeks to highlight.

According to Ghana Agriculture Production Survey (GAP) Report Vol.2 (see p.16), the reasons most cited by survey respondents for relocating during minor crop seasons, are work (31%) and family (23.9%). Historically, Ghana’s public policy response to youth unemployment has been fraught with two fundamental errors:

These errors have had grave consequences for program effectiveness. Though youth (15-24yrs) unemployment in rural Ghana as reported under GLSS6 is higher in urban areas (16.3%), compared to 7.1 percent in rural, the high and increasing rate of underemployment in rural Ghana may be contributing to the youth migration patterns. Rural underemployment in 2012 was 43.9 percent as compared 35.1 percent in 2006. Coincidentally, urban youth unemployment (15-24yr) for same period grew from 6.5 percent in 2006 to 16.5 percent in 2012 (see GLSS6, p. 57).  Though causation is not suggested but the correlation is curious enough to warrant review. When disaggregated on gender lines it is clear that majority of unemployed and underemployed persons in rural Ghana are women, yet majority of these women, especially the aged, are unlikely to relocate in search of better economic opportunities. This positions rural women as victims of structural inequality.

While Ghana has made tremendous improvement in gender empowerment (access to education, healthcare, credit, etc.) over the years, structural disadvantages against women still persist. In order to achieve Strategic Development Goals (SDGs) on gender (SDG# 5), inequality (SDG# 10) and sustainable communities (SDG# 11), public policy response must shift towards a more integrated approach by using evidence-based approach in a manner that considers urbanization, rural development and gender empowerment as key policy issues.

In a bid to contribute towards the achievement of Ghana’s sustainable Development Goal on gender empowerment, Rural Heights Foundation has engaged 26 aged women in Gomoa Pinanko within the Gomoa West district in a program that is designed to assist participants manage the cycle risk in agriculture by diversifying their revenue streams.

The goal is to offer them a buffer during minor crop seasons. The Foundation believes that reaching out to socially disadvantaged women would improve outcomes in household incomes and educational enrolment of children in that community. The infographic below provides an overview of project reach and expect.