Following his sacking on Monday afternoon, former Hearts of Oak coach Kenichi Yatsuhashi, has expressed his disappointment at his exit from the club.

In a open letter to the fans of the Accra-based club, the Japanese coach thanked everyone connected with the club but also spoke of his bitterness at not being able to see out his contract.

“I have had great memories with Accra Hearts of Oak for good time and for difficult time. I thank our supporters for their criticism in the beginning; that made me to push harder to better. I also thank them for unbelievable amount of support after 1st league match; without their support, I would not have accomplished what I had accomplished today,” Kenichi wrote.

Kenichi said the decision to terminate his contract early was taken due to a ‘prior commitment’ which would have seen him take leave from the club in July, when the league was initially scheduled to end. 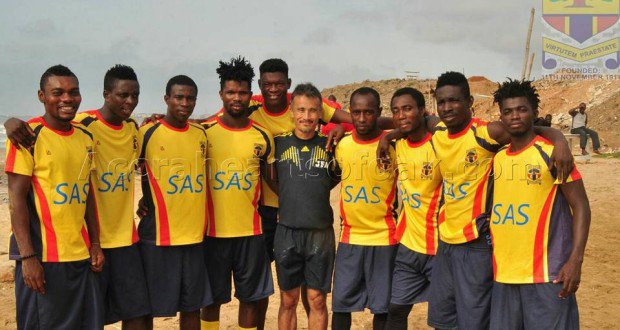 The coach stated that he had expressed a desire to stay on as coach during this period but would hand over the management of the team to his two assistants.

However, the board took the decision to let him go a decision Kenichi emphasised was “by mutual consent.”

“At the time of signing my contract in 1st week of November 2015, I told the managing director at that time that I have a prior commitment in July 2016 that I can’t change the date. At that time, GPL was scheduled to start by December 2015 and we assumed that the league must be over by July 2016 or at lease very close to end of the season. So, he said ‘We will deal with it when the time comes,’ Kenichi said.

“The start of GPL got delayed from December 2015 to end of February 2016; therefore, end of the season got delayed to end of September 2016. So, I approached the board about the 25 days/five matches I will miss. My 1st option was to let my two assistant coaches care take while I am away. If that is not acceptable by the board and the management, then we must terminate my contract to replace me by someone else.”

Yatsuhashi was brought in ahead of the current season and despite lots of skepticism, he managed to guide the Phobians to third place in the first round of the Ghana Premier League.

He led Hearts to an impressive away run in the first round in which they were undefeated and they managed to get wins in Tarkwa, Obuasi and Berekum.