Old students of Achimota Senior High School have indicated that they will seek a court injunction to stop the work of developers who have encroached on the school’s land.

The association believes that the action is necessary to protect the school land.

Parts of the school’s land have been taken over by land guards and developers who were putting up structures without permits.

[contextly_sidebar id=”ylo9ZgjQKfktRI4B4wWcia5tPma7Lzlm”]At a press conference to address the issue, the President of the Old Achimota Association (OAA), ‘Akora’ Ernest Aryeetey said: “we are going to seek a court injunction. We are already in court, there’s been a writ of summons to the parties developing the land, but beyond that, we have taken a decision to seek an injunction to stop the work.”

“All Achimotans who were present pledged to do that and we have given instructions to our lawyers to pursue that line of action,” he added.

According to him, it was imperative for all Ghanaians to join the campaign against the encroachers as the “flame of Achimota cannot be separated from Ghana’s future.”

“We agreed to embark on a media campaign to gain the support of all Ghanaians. Our meeting here with the media is part of that strategy. We want many more Ghanaians to understand us,” Mr. Aryeetey added. 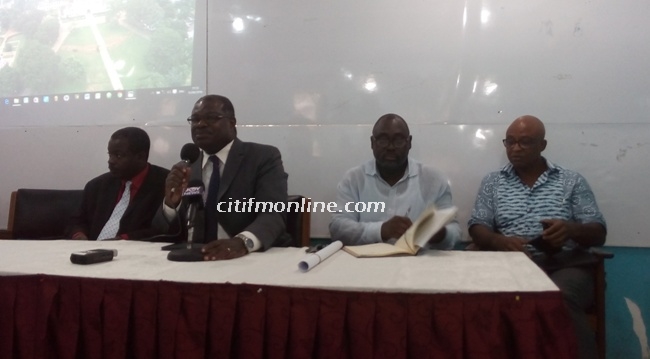 The OAA President revealed that the group was considering a demonstration to drive home their concerns and get the public involved.

“It’s important that we make the public in Ghana feel what is going on. We don’t subscribe to poorly organized demonstrations. We believe in a peaceful march and in assembling Achimotans from different generations, from different social structures and professions, holding placards expressing their disgust at the inaction,” Ernest Aryeetey said.

The Achimota Senior High School is one of the oldest in the country and has produced and large number of prominent personalities in Ghana’s history, including former First Lady, Nana Konadu Agyeman Rawlings, Joyce Aryee, current Minister of Lands and Resources, Nii Osah Mills and Jerry John Rawlings.

When asked whether the school had reached out to their alumini and why they hadn’t received any assistance, Mr. Aryeetey expressed frustration with the lack of action from the relevant authorities.

“Everybody is sympathetic to the plight of Achimota school but almost everybody feels incapacitated.”

“We’ve made contact with everybody in Gov’t; with the Flagstaff House, with Parliament, with Ministers and the AMA, both old Achimotans and non- Achimotans,” he added.

In April, the headmistress of Achimota, Beatrice Adom said her students lived in fear following the activities of land guards at the school.

However, the assistant headmistress sought to allay some of those fears, stating that officials of the BNI had come to the school to assess the situation.

“I must say the school is secured. National Security and officials of the BNI were at the school. They had about four vehicles with armed men and when they came to the site the people run away,” the deadmistress added.