Police are battling with masked jihadi gunmen near a four-star business hotel in Burkina Faso’s capital tonight, amid an ongoing hostage situation.

Security forces arrived as the men fired in the air to disperse the gathering crowd and soon engaged in a fierce gunfight with the suspected jihadis as cars burned around them.

Witnesses said the attackers claimed to be from ISIS, but an Al Qaeda affiliated group nhas reportedly claimed the attack, according to SITE Intelligence Group.

International newsagency Associated Press has reported that several people have died in the attack, according to a restaurant employee and a police officer was shot trying to reach the Splendid hotel opposite where the attackers remain, according to officers.

A senior official with the national gendarmes said suspected Islamist fighters had taken an unknown number of hostages.

‘It is continuing at this time. We are trying to know how many attackers they are to better coordinate our actions. Hostages have been taken. The operation could take several hours,’ the officer said asking not to be named.

A journalist on the scene told CNN that French and US soldiers arived at the hotel.

The gunmen stormed the hotel, burning cars outside and firing in the air to drive back crowds before security forces arrived, prompting an intense exchange of gunfire.

‘It is continuing at this time. We are trying to know how many attackers they are to better coordinate our actions. Hostages have been taken. The operation could take several hours,’ the officer said asking not to be named. 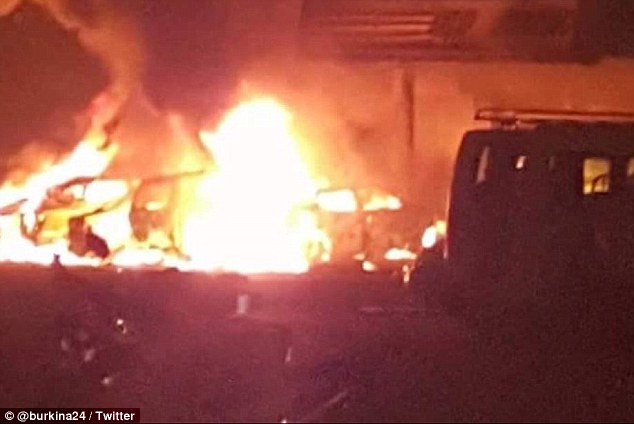 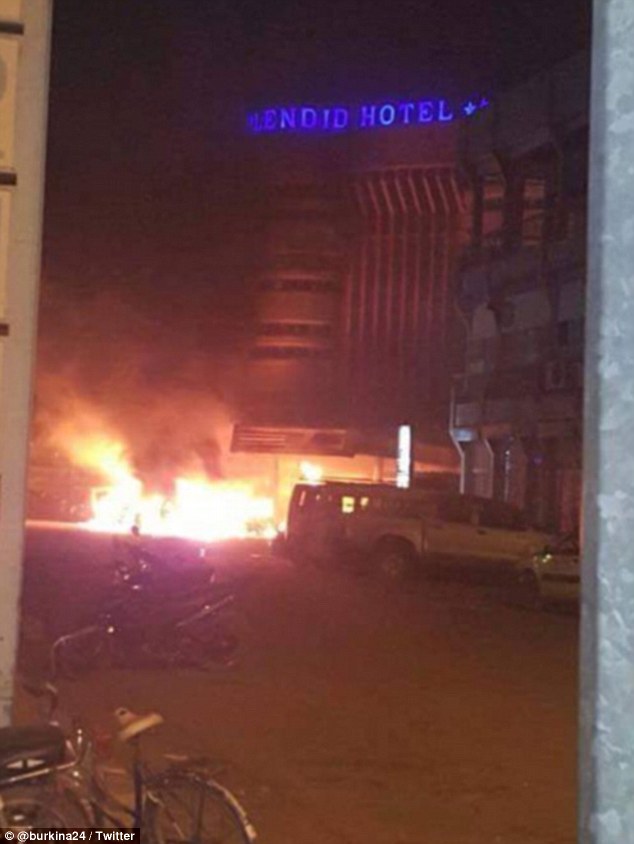 An Associated Press reporter near the scene said late Friday that several cars were also ablaze outside the four-story hotel.

The hotel is reportedly used by UN agency staff and is near a cafe popular with expats.

The French Embassy in Burkina Faso released a statement on its website calling incident a ‘terrorist attack and urged its citizens to return home and to avoide the hotel, the Cafe Capuccino and Kwame NKrumah Avenue. 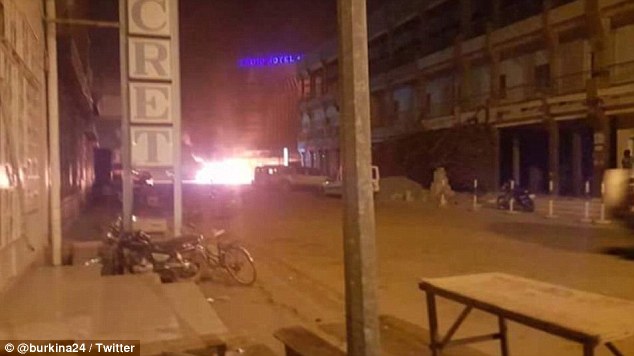 The U.S. Embassy in Ouagadougou tweeted: ‘We are closely following the situation downtown.’

It was not immediately clear who was behind the attack, though jihadists have attacked hotels before in neighboring Mali, including a devastating attack on the Radisson Blu hotel in November that left 20 people dead.

The attack would be the first in Burkina’s capital by Islamists in a country that is diverse in religious terms and has a population that is around 60 percent Muslim, according to government figures.

It would present a significant challenge to President Roch Marc Kabore, who was elected in Nov. 2015 as Burkina Faso’s first new leader in decades.

The French embassy in December warned its citizens against traveling to a national park in eastern Burkina Faso after reports that Malian jihadists were threatening to kidnap foreigners.

An Islamist militant group Al-Mourabitoun said in May, 2015, it was holding a Romanian man kidnapped from a mine in northern Burkina Faso the previous month.

Around 50 unidentified gunmen attacked a Burkina Faso gendarmerie brigade near the country’s western border with Mali in Oct. 2015, killing three in an attack the then government blamed on the leaders of a failed coup one month before.

Burkina Faso has endured bouts of political turmoil since October 2014 when veteran President Blaise Compaore was overthrown in a popular protest, but has been largely spared violence by Islamist militants who have staged attacks in neighboring Mali.

Two militants killed 20 people from nations including Russia, China and the United States at a luxury hotel in Mali’s capital on Nov. 20, 2015, before being killed by the security forces.

Three Islamist groups including al Qaeda in the Islamic Maghreb claimed that attack, the most prominent by militants who are based in the north of the country and have staged a series of attacks over the last year.