The Pakistani city of Peshawar is burying its dead after a Taliban attack at a school killed at least 132 children and nine staff.

Mourners crowded around coffins bedecked with flowers, while other families waited at hospitals for news.

Mr Sharif also convened a meeting of all parliamentary parties in Peshawar to discuss the response to the attack.

The meeting on Wednesday was called to show that the whole nation stood against extremism, Information Minister Pervaiz Rashid told reporters.

World leaders voiced disgust at the Taliban’s deadliest attack to date, which even its Afghan allies disowned.

According to the army, Tuesday’s attack was carried out by seven Taliban attackers, all wearing bomb vests.

They cut through a wire fence to enter the school from the rear and attacked an auditorium where children were taking an exam.

Gunmen then went from classroom to classroom at the military-run school, shooting pupils and teachers where they found them, survivors say.

Prime Minister Nawaz Sharif: “The anti-terrorism campaign in Pakistan will continue until terrorism is rooted out”

The siege at Peshawar’s Army Public School, which teaches boys and girls from both military and civilian backgrounds, lasted eight hours.

A total of 125 people were wounded, according to the army before all seven attackers were killed. Hundreds of people were evacuated.

The Pakistani Taliban sought to justify the attack by saying it was revenge for the army’s ongoing campaign against them. The school was chosen as a target, the militants said, because their families had also suffered heavy losses.

In line with the Islamic custom, mourners began burying victims as darkness fell.

The bier carrying the shrouded body of one teacher was strewn with flowers as men crowded around it. 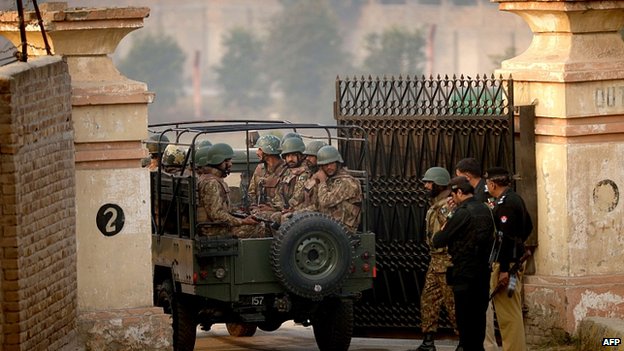 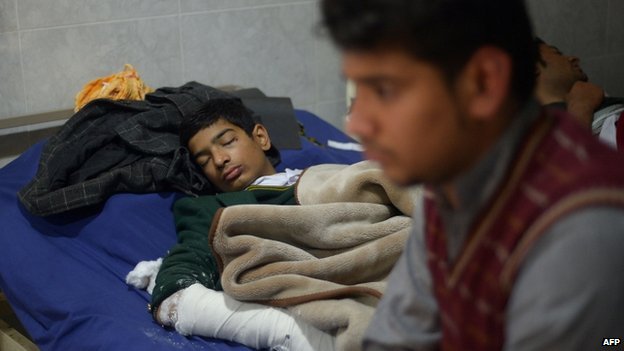 Some wounded students remain at the main hospital in Peshawar 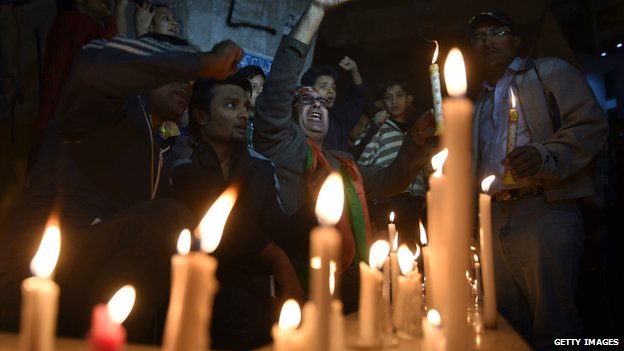 There was anger at this candlelit vigil for the victims in Karachi, Pakistan 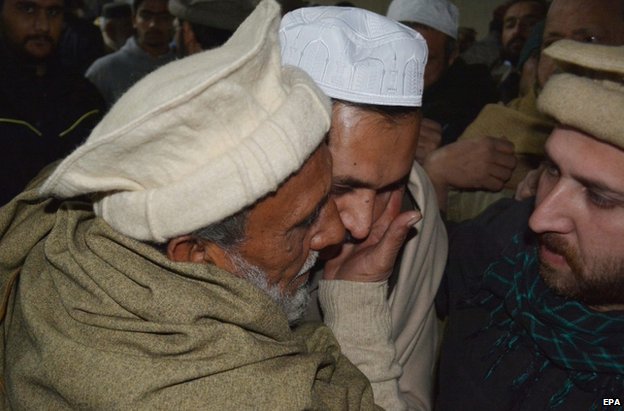 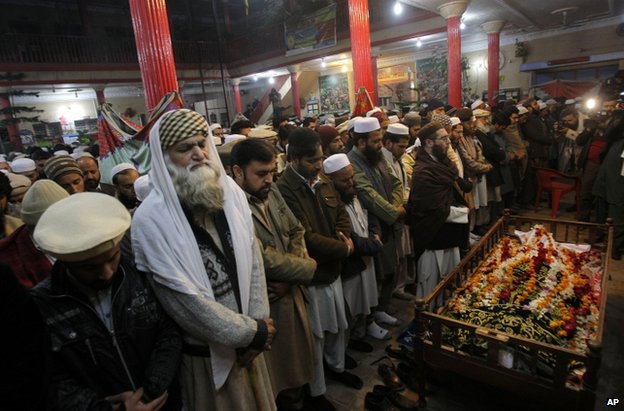 At the funeral of one pupil, his father told the Associated Press news agency: “He was only 15 years old and was in the eighth grade.

“I was in the court when I received a call about the incident and then rushed towards the hospital… He got a bullet right in his chest and another bullet hit his hand. I am sorry I can’t talk any more about it.” 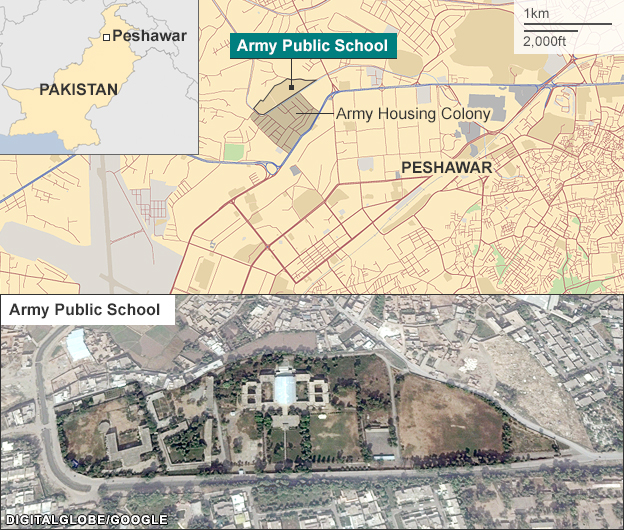 “We will take revenge for each and every drop of our children’s blood that was spilt today,” he said.

Malala Yousafzai, the 17-year-old who was shot by the Pakistani Taliban for championing girls’ rights to education, also condemned “these atrocious and cowardly acts”.

“Innocent children in their school have no place in horror such as this,” she said. 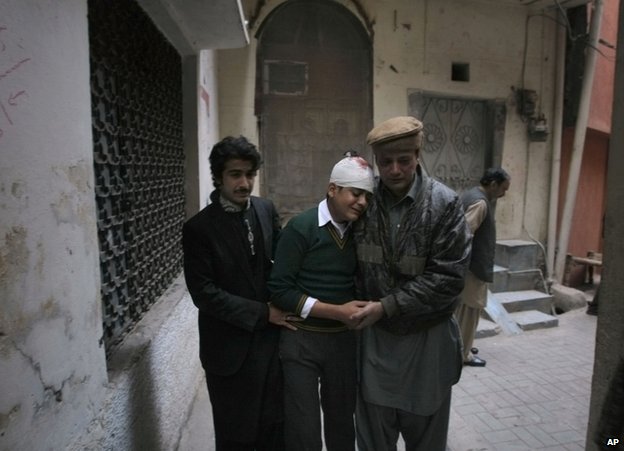 School pupil Mohammad Baqair lost his mother, a teacher, in the attack

In line with the national mourning, Pakistani embassies worldwide will have their flags lowered to half-mast and books of condolences will be opened. 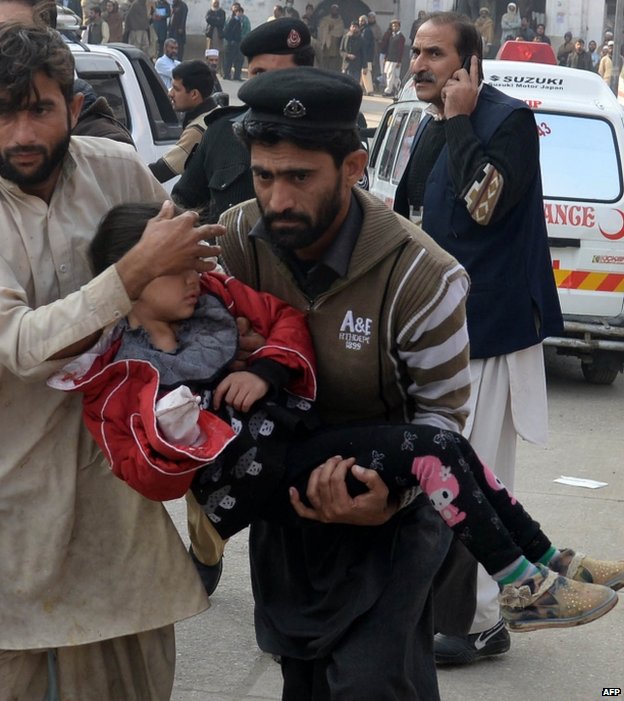 The military response is already reported to have begun.

Pakistani military spokesman Asim Bajwa announced in a tweet that 10 air strikes had been carried out in the Khyber region, along with other action, as yet unspecified.

Pakistani Taliban spokesman Mohammad Khurasani said the militants had been “forced” to launch the attack in response to army attacks.

He accused the military of killing the children and womenfolk of Taliban fighters and burning their homes.

Hundreds of Taliban fighters are thought to have died in a recent government offensive in the Khyber area and North Waziristan, regions close to the Afghan border.

16 December 2014: Taliban attack on school in Peshawar leaves at least 141 people dead, 132 of them children

22 September 2013: Militants linked to the Taliban kill at least 80 people at a church in Peshawar, in one of the worst attacks on Christians

10 January 2013: Militant bombers target the Hazara Shia Muslim minority in the city of Quetta, killing 120 at a snooker hall and on a street

18 October 2007: Twin bomb attack at a rally for Benazir Bhutto in Karachi leaves at least 130 dead. Unclear if Taliban behind attack

In Afghanistan itself, the local Taliban described the school attack as un-Islamic.

The Afghan Taliban are currently stepping up their own attacks in Afghanistan and share roots with the Pakistani Taliban and usually share the same ideology too, the BBC’s Mike Wooldridge reports from Kabul.

But their spokesman, Zabihullah Mujahid, said that they were sending their condolences to the families of the children killed in the Peshawar attack and that they shared their sadness.

US President Barack Obama said terrorists had “once again shown their depravity” while UN Secretary General Ban Ki-moon said it was “an act of horror and rank cowardice”.