Sony has confirmed it has no plans to release the satirical film The Interview internationally, in any form, following threats from hackers.

Cinemas in the US cancelled screenings of the film, about a plot to kill North Korea’s leader, prompting Sony to shelve it altogether.

But there has been dismay in Hollywood, with Ben Stiller calling the move “a threat to freedom of expression”.

Hackers had issued a warming to cinema-goers who planned to watch the movie.

President Obama recommended that “people go to the movies”, but stressed that the hack was “very serious”.

Speaking to US television network ABC, he added: “We’ll be vigilant – if we see something that we think is serious and credible, then we’ll alert the public.”

Several other famous names have criticised the decision to shelve the movie, accusing the studio of caving in to the hackers’ threats.

Oscar-wining screenwriter Aaron Sorkin, who has already attacked the media for spreading information leaked by the hackers, said: “Today the US succumbed to an unprecedented attack on our most cherished, bedrock principle of free speech.”

On Wednesday it emerged that Carell’s planned film project, a thriller called Pyongyang about a Westerner working in North Korea, was scrapped ahead of Sony’s announcement.

Comedian Jimmy Kimmel tweeted that the decision by theatres to refuse to show the film was “an un-American act of cowardice that validates terrorist actions and sets a terrifying precedent.”

Film producer Judd Apatow, meanwhile, offered a different slant on the move, saying: “This only guarantees that this movie will be seen by more people on earth than it would have before. Legally or illegally all will see it.”

Sony said it was “deeply saddened at this brazen effort to suppress the distribution of a movie”.

“We respect and understand our partners’ decision and, of course, completely share their paramount interest in the safety of employees and theatre-goers,” the studio said.

It added: “We stand by our film-makers and their right to free expression and are extremely disappointed by this outcome.”

The cancellation comes after hackers calling themselves Guardians of Peace released emails and data stolen from Sony in late November.

In a later warning to cinemas screening The Interview, they referred to the 9/11 attacks, claiming “the world will be full of fear”. 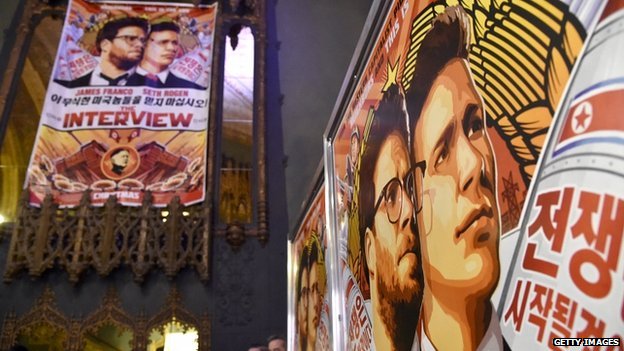 Stars of The Interview have pulled out of media appearances

“Remember the 11th of September 2001. We recommend you to keep yourself distant from the places at that time,” the hacker group wrote, in a message on Tuesday.

“Whatever comes in the coming days is called by the greed of Sony Pictures Entertainment.”

Sony had given theatres in the US and Canada the option to bow out of showing The Interview in the wake of the threats.

However, the Alamo Drafthouse cinema in Texas has decided to replace The Interview with a screening of Team America, a film featuring a marionette of late North Korean leader Kim Jong-il, the father of Kim Jong-un.

Ecobank boss calls for mergers and acquisitions of banks in Ghana