Australian police have urged the mother of a baby found dead and buried in the sand at Sydney’s Maroubra beach to come forward.

The body, which was discovered by two young boys, was buried under 30cm (12in) of sand, police said.

Police said they could not immediately tell the age or gender of the baby, as the body was badly decomposed. A post-mortem examination will be conducted.

It comes a week after a newborn was found alive in a drain in Sydney.

“Come and talk to us, seek some advice, we need to talk with you,” said New South Wales state police commissioner Andrew Scipione. He also asked that anyone who might know the mother to speak to authorities.

Police said that the two boys, aged six and seven, discovered the body on Sunday morning while digging in the sand at Maroubra beach.

The baby was a “very small infant child” and had been buried naked, police said.

“The sex and age of the child is unable to be determined at this point due to the decomposition of the body,” Police Inspector Andrew Holland told reporters. 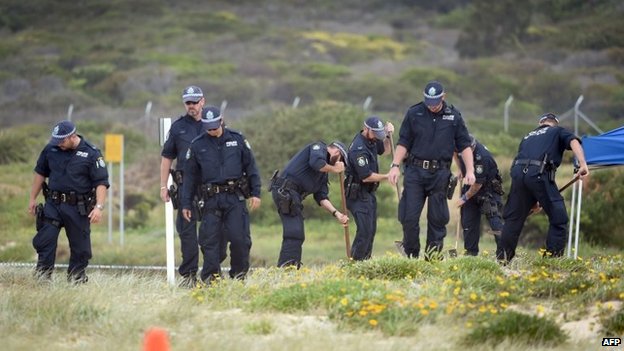 Police searched through sand dunes on Maroubra beach on Sunday

“Obviously everyone is upset,” he added. “It’s a tragic event. Something like this doesn’t happen every day and it affects everyone involved.”

He said that police were investigating birth, death and marriage records, and visiting local hospitals, to try to locate the parents of the child.

“Police are concerned about the welfare of the mother involved and hope she sought medical assistance,” he added.

The two boys who discovered the body are receiving counselling.

On 23 November, cyclists found a newborn baby abandoned in a stormwater drain in western Sydney.

Police said the boy had been left in the drain for five days before he was rescued.

The mother of the boy has been charged with attempted murder. Her case is expected to be heard in court on 12 December.

New South Wales Police Minister Stuart Ayres said the twin cases raised questions about what should be done to help families that are desperate.

“There is no doubt we find ourselves with two cases that are currently under investigation that requires us to think seriously about what we need to help families that are in crisis,” he said according to AFP news agency.