Ferguson shooting: Protests spread across US

A dozen US cities have seen new protests over the decision not to charge a white policeman who killed a black teenager in Ferguson, Missouri.

Demonstrations from New York to Seattle were largely peaceful but rioting broke out in Oakland, California.

There was some unrest in Ferguson itself, with police making 44 arrests, but the town did not see destruction on the scale of Monday night.

The officer who killed Michael Brown there says he has a “clean conscience”.

Darren Wilson, who shot the 18-year-old on 9 August, told ABC News that in the struggle which preceded the shooting, he had felt “like a five-year-old holding on to [US wrestler] Hulk Hogan”.

Officer Darren Wilson, who shot and killed Michael Brown: “I know I did my job right”

Many in Ferguson’s predominantly African-American community had called for the officer to be charged with murder, but the grand jury’s decision means the police officer will not face state criminal charges over the shooting.

Lawyers for Mr Brown’s family denounced the grand jury’s decision, saying they “strongly objected” to the way prosecutor Bob McCullough laid out the case, while condemning the violence that followed. 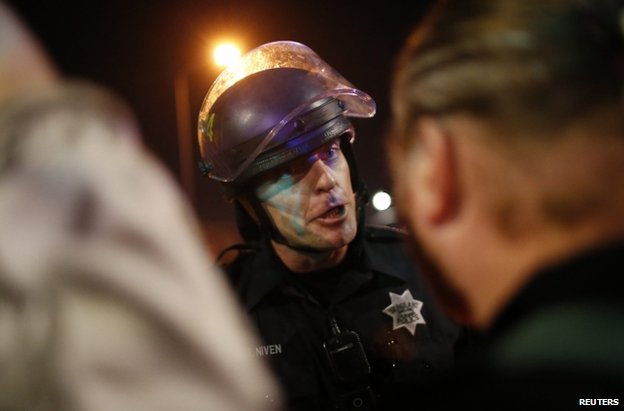 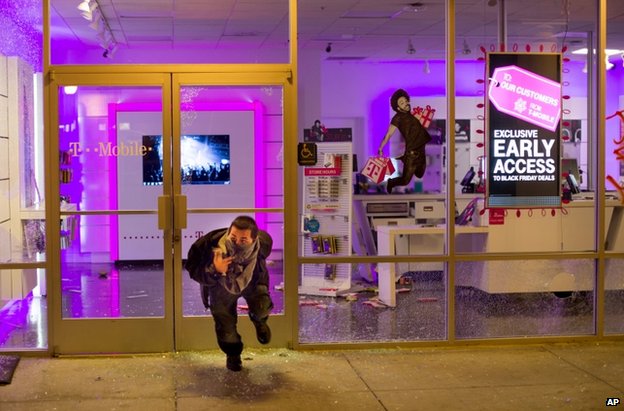 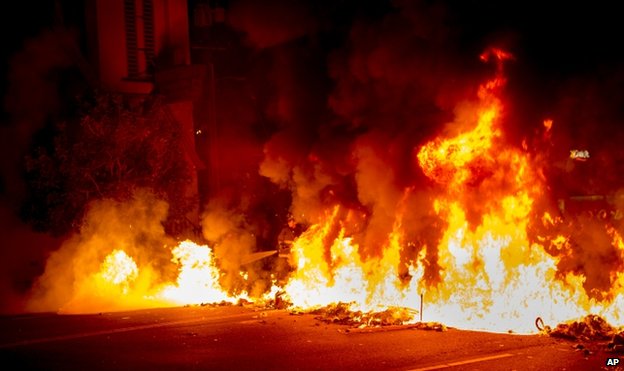 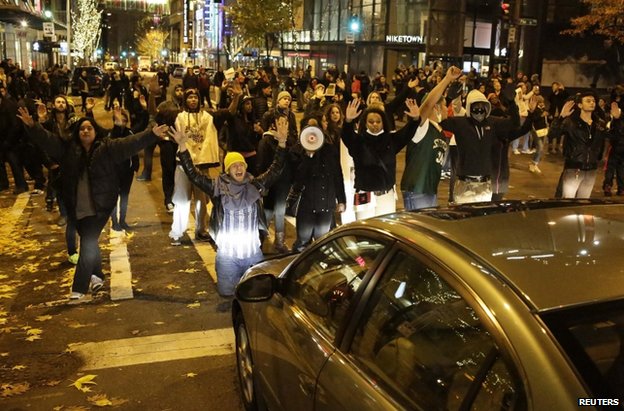 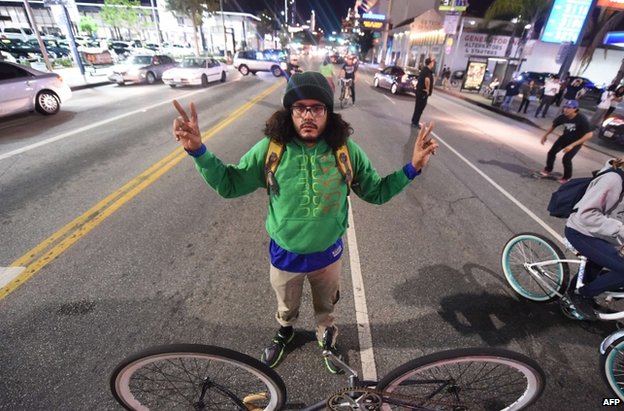 Here a cyclist blocks a road in Los Angeles

St Louis County police chief Jon Belmar said Tuesday had been “generally a much better night” in Ferguson, a town of 21,000 people.

Tear gas was fired just once, he said, when rioters smashed windows at the Ferguson town hall. There was only one report of shooting, he added, when a car was set alight.

Some 2,200 National Guard soldiers were deployed to assist police in keeping order in and around the town.

Demonstrators across the US chanted the refrain “hands up, don’t shoot” in reference to some witness statements that said Mr Brown was raising his hands in surrender when he was killed.

But many protests also referred to police killings in their own city, including a man in New York who died after being placed in a “chokehold” by a police officer.

In Oakland, in the San Francisco Bay area, rioters vandalised police cars and attacked businesses in the centre during a second night of unrest in the port city of 406,000 people.

Long-standing grievances about Oakland’s police department are believed in part to be fuelling the protests there.

On Monday night, 43 arrests were made in Oakland as police struggled to control a crowd of some 2,000 people.

There’s been confrontation outside Ferguson town hall where a police vehicle was burnt earlier and tear gas still hangs in the air. There’s a heavy police presence with several armoured cars and vehicles.

There is tension as police try to move people from the area – officers are saying anyone standing in the street will be subject to arrest. Some are giving chase to people in the surrounding streets and tonight they have dogs with them. A police helicopter is hovering overhead with a spotlight.

Further along, police and the National Guard face off with an angry crowd in front of the Police Department. There are fewer protesters, but a larger media presence. The crowd is jittery and there is a sense there could be further clashes. 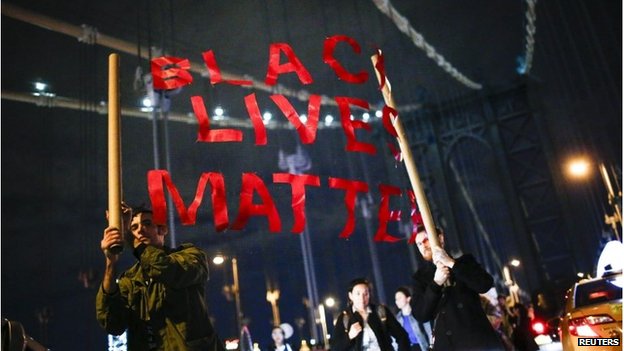 Protesters in New York briefly shut down the Brooklyn Bridge 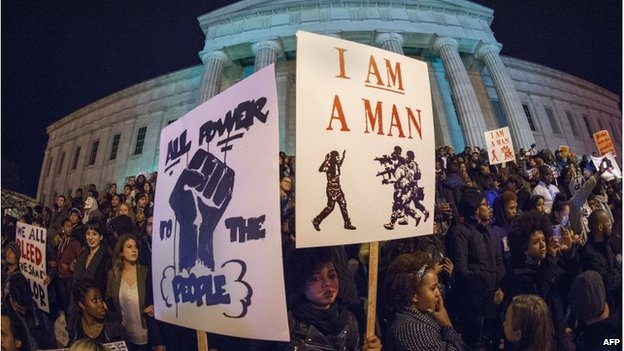 In Washington, DC, protesters gathered on the steps of the National Portrait Gallery 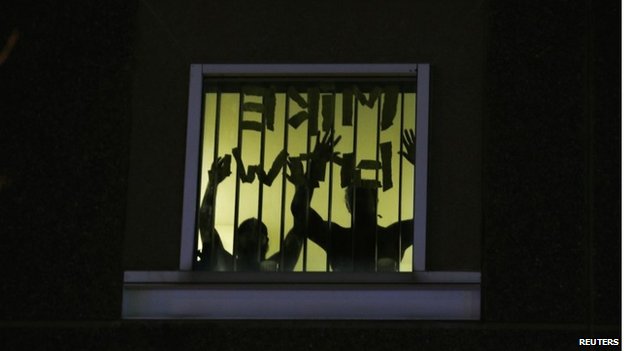 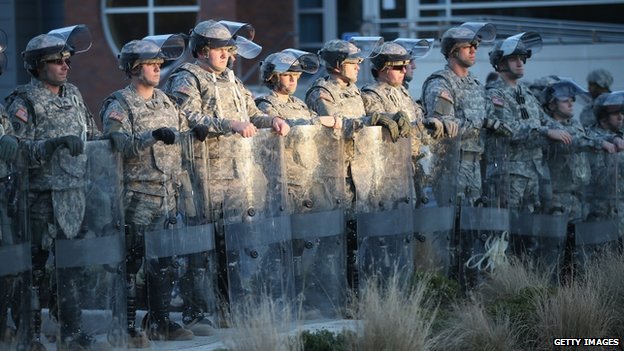 In Ferguson itself, the number of National Guardsmen was more than tripled

Speaking from Chicago on Tuesday, President Barack Obama said there was “no excuse” for destructive behaviour and criminal acts of rioting.

Accepting that “many communities of colour” had a sense of laws not being enforced “uniformly or fairly”, he said he had ordered Attorney General Eric Holder to look at what steps could be taken to build trust.

A federal civil rights investigation is under way into Mr Wilson’s actions, as is a broad federal inquiry into the Ferguson police department, looking for patterns of discrimination.

Speaking to ABC News in his first public comments, Mr Wilson said there was nothing he could have done differently.

“The reason I have a clean conscience is because I know I did my job right,” he said.

He denied witness statements that Mr Brown had put his hands up, insisting race had played no part in the confrontation. 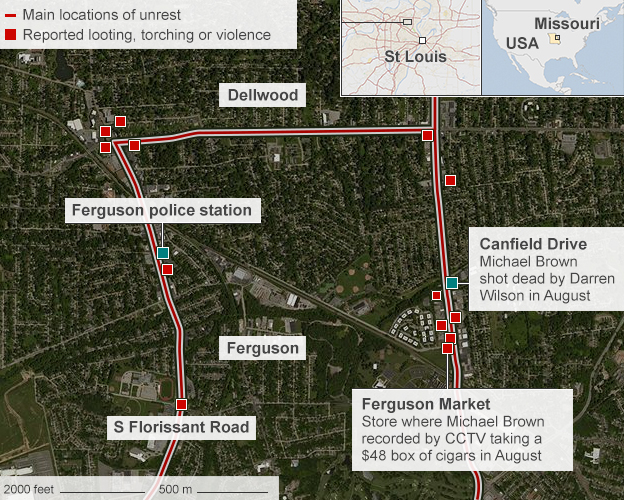