Wakaso can become a Celtic cult hero after debut goal

Ronny Deila had never seen Wakaso Mubarak in the flesh when he gambled on a one-year loan deal for the Ghanaian winger.

Yet it took just one look at the stocky 24-year-old to detect a Celtic cult hero in the making. A potential crowd pleaser who can fulfil the Norwegian’s craving for genuine pace and width in his team.

Cast into the starting line-up in pressing circumstances against Salzburg in the Europa League, the World Cup star marked his debut with a stunning 14th-minute goal. His general display raised hopes that Celtic have made an astute capture. For 12 months, at least. Possibly longer, depending on price.

‘I hadn’t seen him play live before he came here,’ Deila admitted. ‘I have my people I trust and a scouting department here I’m working with every day. They know what I’m after.

‘Wakaso has played in good clubs, like Espanyol, at a high level. I have contacts in Spain and they were seeing very positive things about him. I can now see why.

‘It looks like he could become a fans’ favourite at Celtic. Our fans like quick players, players who can go past people and who have energy. Wakaso had that in his game on Thursday night.

‘That’s the kind of team we want to be. We want to be similar to how Red Bull Salzburg were – that’s our goal. Maybe not so wide, but very aggressive and hungry to win the ball. Wakaso showed that level.’

Noted for a raft of yellow and red cards during his time in Spanish football, Wakaso brought aggression and flair to Celtic’s attacking efforts. He also brought a flair for the dramatic, one instance of rolling around following a heavy challenge from a Salzburg player showing a hint of cynicism.

Yet Deila prefers to couch what he brings to the Celtic team in more diplomatic terms.

‘He has a lot of confidence,’ the Parkhead manager continued. ‘African players are different from European players, of course. It’s a different culture. But I’ve worked a lot with African players and they need to be loved, like everyone else. I think he will develop.

‘It’s good that he’s been in Europe now for many years. Had he come straight from Africa, then I would have been more afraid.

‘It’s also easier to be like that in an attacking rather than a defensive position.

‘He’s working hard and tactically he’s been good. He knows the game.

‘He takes cares of himself. He has natural talent there. But he needs time, he has a lot more to come. 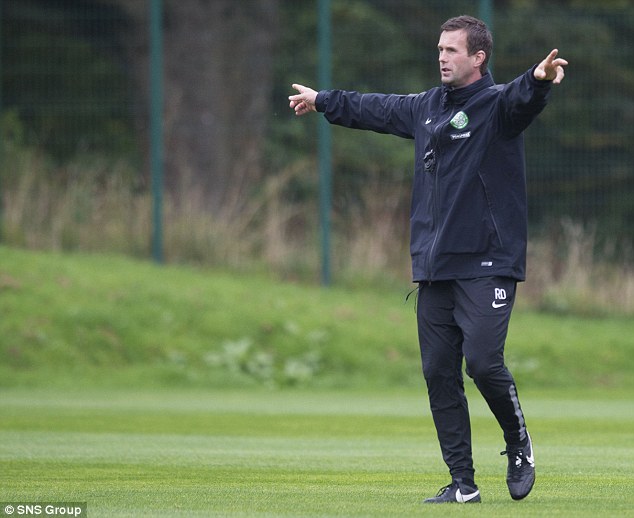 ‘He needs to be quicker and sharper, but that will come when he gets games.

‘He didn’t get back to Scotland from international duty last week until the Friday night, so that’s why he didn’t play against Aberdeen. I hadn’t seen him in training.

‘But he trained well this week, so he got the chance against Salzburg. He was very good in the game. It was very nice to see.

‘He gives us another weapon in the wide midfield positions. He can eliminate players, get past them and he is good on the ball. That’s what I wanted to see and I’m happy for him.’

Wakaso’s 14th-minute strike, a controlled first-time effort from the edge of the box showed what Deila described as ‘fantastic technique,’ adding: ‘I hope he does more of that. It was a difficult shot to take on. He had a positive impact on the game. I want wingers who can work the pitch both ways, defensively and offensively, and he can do that. It’s very positive for us.’

To suggest Wakaso has already shown enough for a permanent agreement would be premature. On loan from wealthy Russian club Rubin Kazan, there is also no guarantee Celtic could afford him.

If the Scottish champions wish to sign Aleksander Tonev or Jo Inge Berget, they already know what they must pay. Asked if the same applied to Wakaso, Deila was nimble on his feet.

‘I know what the fee is,’ he said, ‘but I won’t share it. We’ll see if it’s affordable but there is always a negotiation.’

That sounded for all the world like he wouldn’t be within their price range, but the Parkhead boss insisted: ‘We wouldn’t bring him here if it was not possible.’

Wakaso is one of four loan players, Celtic paying a fee for just one player when they signed Serbian Stefan Scepovic for £2.2million.

The early signs are mixed. Tall, but not imbued with great physical strength, Scepovic is no Chris Sutton. In two games against Aberdeen and Salzburg, his impact has been constrained to fleeting glimpses of ability. 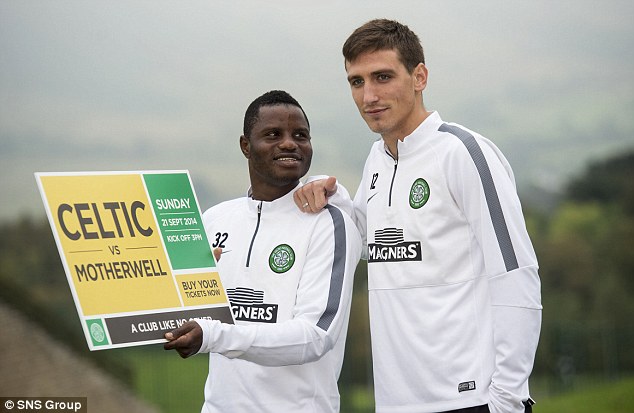 Wakaso (left, next to Stefan Scepovic) has all the tools to become a cult hero at Celtic Park this season

‘I think he was better in the second half against Salzburg,’ said Deila. ‘He came more into the game.

‘He hasn’t played much and he needs to adapt. I see in training and in games that he has good qualities. I know in time he will succeed here.

‘He needs more power but he’s into the training and wants to develop so that will come.’

Scepovic, himself, admits he needs to bulk up and adapt to a Scottish game significantly more physical than he is accustomed to.

‘I need time to get used to Scottish football but I think hard work on the training pitch and gym will make things okay,’ said the new Bhoy.

‘I will get a programme for the gym and, in time, everything will be how I expect.

‘Sometimes strikers don’t score for three games but then score in two or three in a row.

‘The most important thing is we won the game against Aberdeen and then took a point away in Europe.

‘Now we have to concentrate on the game against Motherwell.’

Captain Scott Brown was returning to Scotland via Germany yesterday after missing Celtic’s flight home. Unable to produce a urine sample for drugs testers before Salzburg Airport closed, the skipper is expected to play against Motherwell tomorrow.

Adam Matthews, James Forrest, Charlie Mulgew and Mikael Lustig are still out, while Scepovic is also struggling with a dead leg. John Guidetti is available after being ineligible for the Europa League.