About 120 million girls around the world – slightly more than one in 10 – have been raped or sexually assaulted by the age of 20, a UN report says.

The children’s agency Unicef also says 95,000 children and teenagers – most of them in Latin America and the Caribbean – were murdered in 2012 alone.

It notes that children around the globe are routinely exposed to violence, including bullying.

The document draws on data from 190 countries. 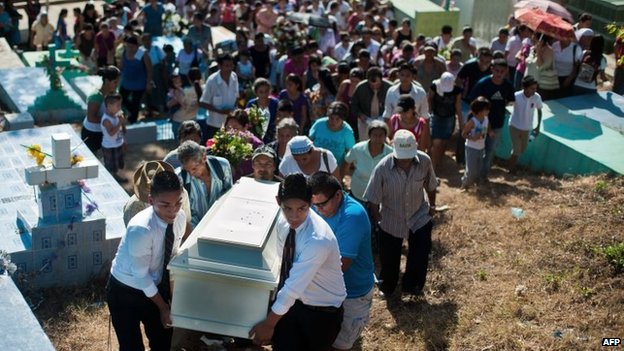 Homicide is the leading cause of death among young males in many Latin American countries, the UN says

“It occurs in places where children should be safe, their homes, schools and communities.

“Increasingly, it happens over the internet, and it’s perpetrated by family members and teachers, neighbours and strangers and other children.”

The study revealed that about six out of 10 children aged between two and 14 were subjected to physical punishment from their carers on a regular basis.

One in three girls, aged between 15 and 19, who had at some time been in cohabiting relationships, had been victims of emotional, physical or sexual violence committed by their husbands or partners, the report said.

Partner violence appeared to be particularly prevalent in countries including the Democratic Republic of Congo, Uganda, Tanzania and Zimbabwe, the report said.

Of the countries surveyed, nearly half of all girls aged 15-19 believed that a husband was justified in hitting his wife under certain circumstances, the study added.

Meanwhile, homicide was reported as the leading cause of death in boys and men aged 10-19 in many Latin American countries, such as Venezuela, Panama, Brazil and Colombia.

Research showed that violence was “detrimental to all aspects of a child’s growth… with sometimes lifelong repercussions,” the report said.

It noted that while there had been growing recognition in recent years about the impact of violence against children, it largely remained underreported and undocumented.

The report stressed that violence against children in some countries remained socially accepted or tacitly condoned, and quite often victims were too afraid to report the abuse.

Never before have so many statistics been gathered from so many different countries, and together they have produced a grim global audit of violence against children, the BBC’s Nick Bryant at the UN says.