Kerry in Turkey to boost support for anti-IS coalition

US Secretary of State John Kerry has arrived in Turkey to seek support for more military action against Islamic State (IS) fighters in Iraq and Syria.

It comes after Turkey refused to allow the use of its southern air bases to launch attacks on the jihadist group.

French President Francois Hollande is currently in Baghdad to boost support for forming a coalition to combat IS.

US President Barack Obama unveiled plans this week to expand its campaign against IS militants in the region.

Ten Arab nations have agreed to help the US in its fight against the jihadist group, which the CIA said on Thursday may have up to 31,000 fighters on the ground.

France has also offered its support for military action against the group, as part of a coalition being formed by Washington.

“The goal is to co-ordinate aid, support and action for the unity of Iraq and against this terrorist group,” President Hollande told reporters at the start of his one-day visit to Iraq. 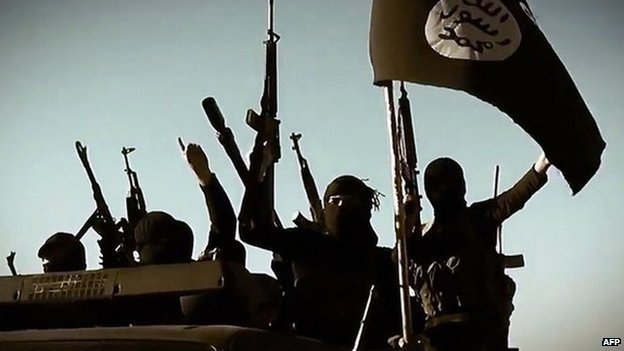 He said he had assured Iraqi President Fuad Masum of “France’s support and solidarity” with the new Iraqi government, which was announced earlier this week.

The French president is due to visit Irbil, the capital of Iraq’s autonomous Kurdish region, to distribute humanitarian aid later on Friday.

US Secretary of State John Kerry arrived in Ankara on Friday to try to secure more co-operation from the Turkish government, in meetings with President Recep Tayyip Erdogan and Prime Minister Ahmet Davutoglu.

It comes a day after Mr Kerry met representatives from 10 Arab nations in Jeddah, Saudi Arabia, who said in a shared communique that they “agreed to do their share in the comprehensive fight” against IS. 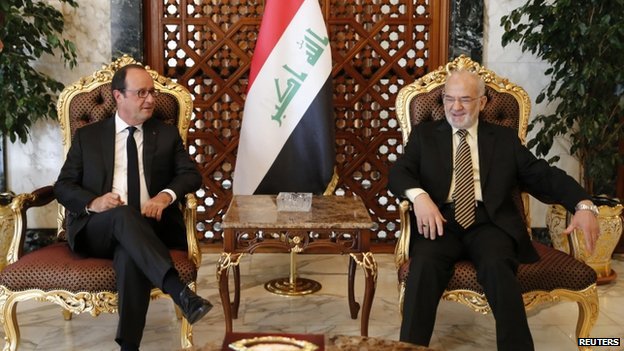 Nato member Turkey was also at the Jeddah meeting, but did not sign the statement.

A spokesman for the Pentagon says that Washington is preparing a more “aggressive” air campaign, with some of the aircraft taking off from the airbase at Irbil, the BBC’s Jim Muir in Irbil says.

One reason for that, our correspondent adds, is that Turkey has refused to allow such missions to be flown from nearby bases in southern Turkey. It fears for the lives of nearly 50 Turkish hostages held by the militants, including staff from the consulate in Mosul.

Paris is due to host a major international conference on Monday where regional and international powers will seek to coordinate support for Iraq in its battle against IS militants.

Mr Kerry earlier announced an aid package worth nearly $500m for people and countries hit by the Syrian conflict, $250m of which will be allocated for refugees hosted in neighbouring countries.

It follows reports that dozens of people were killed in Syrian government air raids on the rebel stronghold of Douma, north-east of the Syrian capital Damascus, on Thursday. 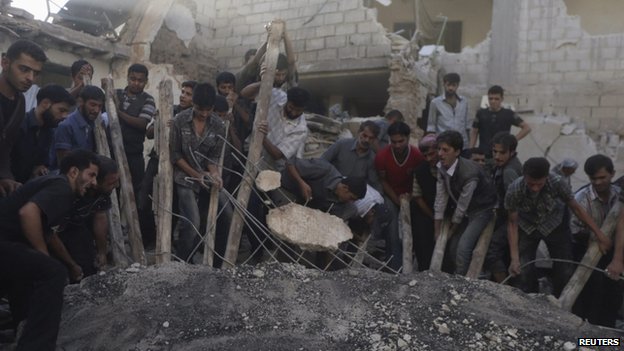 Destruction and rubble left after airstrikes on Douma, a frequent target of Syrian government forces 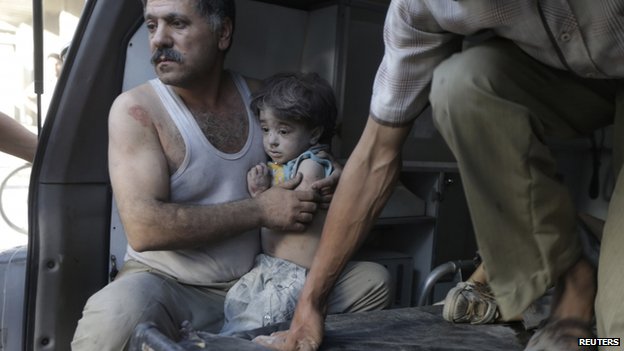 Dozens were reported killed in the attacks, with children among the casualties

“The toll from regime air raids on Douma has risen to 42 dead, including seven children and two women,” the UK-based Syrian Observatory for Human Rights said.

Government airstrikes also hit a market in a town south-east of Aleppo, in northern Syria, killing 11 people, in an attack on Islamic State militants, the observatory added.

The CIA has said there may be three times as many IS fighters in Iraq and Syria as previously feared, based on a review of intelligence reports from May to August.

The group was previously believed to have had about 10,000 fighters but numbers may be as high as 31,000, spokesman Ryan Trapani said.

President Obama on Wednesday outlined a plan to “degrade and destroy” IS and to increase military support for allied forces engaged in fighting the group.

For the first time, he authorised air strikes against the group in Syria.

In recent months IS has expanded from its stronghold in eastern Syria and seized control of more towns, cities, army bases and weaponry in Iraq.

The US has already carried out more than 150 air strikes against IS in northern Iraq. It has also sent hundreds of military advisers to assist Iraqi government and Kurdish forces, but has ruled out sending ground troops.

Other countries, including the UK, have contributed humanitarian assistance to Iraqis displaced by the group’s advance.

Eurobond cash to hit Ghana’s account in a few weeks