The elder of the brothers, Henry McCollum, is said to have the mental age of a nine-year old

Two US men who spent three decades in prison for rape and murder, one of them on death row, have been released after DNA evidence proved their innocence.

Mentally disabled half brothers Henry McCollum, 50, and Leon Brown, 46, were convicted in 1984 of raping and killing an 11-year-old girl in North Carolina.

Recently analysed DNA evidence from the crime scene implicated another man, who is in prison for a similar crime.

A county judge ordered the immediate release of the brothers.

The commission found that none could be traced to Mr McCollum or Mr Brown. 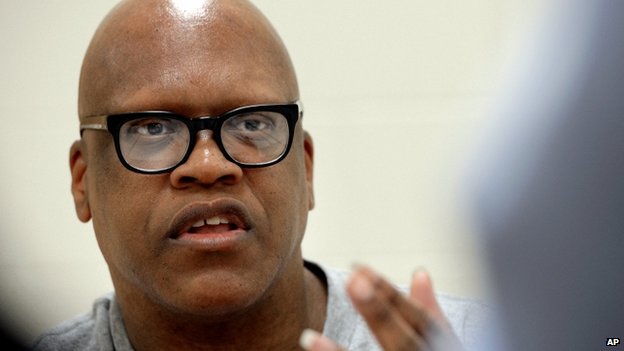 Brown confessed as a teenager after hours of interrogation by police

“This case is a tragedy which has profoundly affected not only the lives of the people involved, but which profoundly affects our system of justice in North Carolina,” said lawyer for Mr Brown, Ann Kirby.

The near-naked body of 11-year-old Sabrina Buie was found in 1983 near the town of Red Springs, North Carolina. She had been raped before being killed.

Mr McCollum and Mr Brown, who were 19 and 15 at the time, were picked up by police a few weeks later. There was no physical evidence connecting them to the crime.

Mr McCollum confessed after five hours of intense questioning, without a lawyer or family member present.

His younger brother also signed a confession written by the police.

The two later recanted their confessions in court, saying they were made under duress. But despite a weak case, the brothers were found guilty and given death sentences.

Mr Brown’s sentence was later reduced to life in prison and his charge reduced to rape, but Mr McCollum remained on death row for three decades.

In the years since their false confessions, Mr McCollum and Mr Brown maintained their innocence and made a number of appeals.

In 2010 the North Carolina Innocence Inquiry Commission took up their case and uncovered evidence the men’s legal team had not been able to obtain.

The evidence found no link between the brothers and the victim, but did implicate Roscoe Artis, 74, who lived close to where the victim’s body was found.

Although he was not a suspect in the original case, Artis was found guilty for the rape and murder of another girl in similar circumstances less than a month after Sabrina Buie’s killing.

After Tuesday’s release of Mr McCollum and Mr Brown, their legal team thanked those who had worked to correct wrongs that occurred under the previous prosecutions

“It’s terrifying that our justice system allowed two intellectually disabled children to go to prison for a crime they had nothing to do with, and then to suffer there for 30 years,” said lawyer Ken Rose.

“It’s impossible to put into words what these men have been through and how much they have lost.”