The murder of David Haines was an “act of pure evil”, David Cameron has said after the release of a video appearing to show the UK hostage’s beheading.

The 44-year-old aid worker was seized in Syria in 2013. He was being held by Islamic State militants who have already killed two US captives.

The latest video also includes a threat to kill a second British hostage.

The PM vowed to do everything possible to find the killers. Mr Haines’s family said he would be “missed terribly”.

Born in Holderness, East Yorkshire, Mr Haines went to school in Perth and had been living in Croatia with his second wife, who is Croatian, and their four-year-old daughter. His parents live in Ayr.

In a statement released by the Foreign Office, Mike Haines said his brother, a father of two, “was and is loved by all his family”.

“David was most alive and enthusiastic in his humanitarian roles. His joy and anticipation for the work he went to do in Syria is for myself and family the most important element of this whole sad affair,” he said. 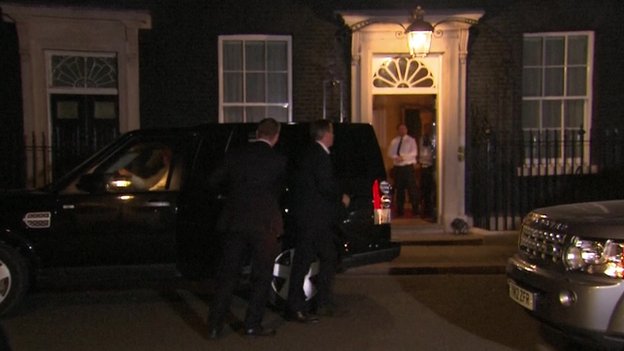 Mr Cameron, who is due to chair an emergency Cobra committee meeting later, said the murder of an innocent aid worker was “despicable and appalling”.

“It is an act of pure evil. My heart goes out to the family of David Haines who have shown extraordinary courage and fortitude throughout this ordeal.

“We will do everything in our power to hunt down these murderers and ensure they face justice, however long it takes,” the prime minister added.

The Foreign Office is working to verify the video, which was released on Saturday night. It begins with a clip of Mr Cameron and then features a man who appears to be Mr Haines dressed in orange overalls, kneeling in front of a masked man holding a knife.

The victim says: “My name is David Cawthorne Haines. I would like to declare that I hold you, David Cameron, entirely responsible for my execution.”

He says Mr Cameron had entered into a coalition with the US against the Islamic State “just as your predecessor Tony Blair did”.

“Unfortunately it is we the British public that in the end will pay the price for our parliament’s selfish decisions,” he said.

The militant, who appears to have a British accent, is then recorded as saying: “This British man has to pay the price for your promise, Cameron, to arm the Peshmerga against the Islamic State.” 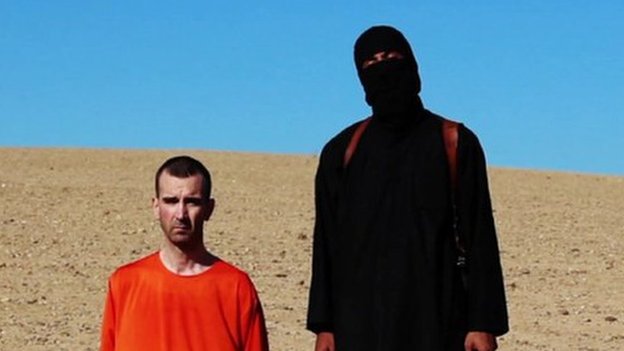 Islamic State is now in control of large parts of northern Iraq and Syria, and the CIA estimates that the group could have as many as 30,000 fighters in the region.

The UK has donated heavy machine guns and ammunition to authorities in Iraq to help fight IS militants, the Ministry of Defence has previously said.

Kurdish forces, known as the Peshmerga, have been involved in heavy fighting with IS.

US President Barack Obama said: “Our hearts go out to the family of Mr Haines and to the people of the United Kingdom.”

In a statement, he said the US would work with the UK and a “broad coalition of nations” to “bring the perpetrators of this outrageous act to justice”.

The French presidency said: “The heinous murder of David Haines shows once again how the international community must mobilise against [IS].”

Scottish First Minister Alex Salmond said the release of the video “demonstrated a degree of brutality which defies description”.

“It should be remembered that Mr Haines was in the region as an aid worker helping local people,” Mr Salmond added.

And he told the BBC’s Andrew Marr programme that Mr Haines’s death was “an act of unspeakable barbarism”.

He also said a resilience meeting – the Scottish government’s version of the UK’s Cobra security meeting – would be held on Sunday morning to discuss issues such as the privacy of Mr Haines’s family.

The leader of the Better Together campaign in Scotland, Alistair Darling, told the same programme that “David Haines was trying to help people in dreadful conditions”.

His death was “inexcusable, a barbaric act” that would “strengthen the resolve of the international community,” Mr Darling added.

The beheadings of David Haines, and the two American journalists before him, are believed to have been filmed in the desert near Raqqa, a provincial capital in north-east Syria which has become the unofficial capital of the self-styled Islamic State.

Far from being just a shadowy terror group, IS controls a large swathe of territory in the north and east of Syria, linked since June to almost all the mainly Sunni parts of Iraq.

It controls a population of around 5 or 6 million people, including Iraq’s second city, Mosul.

In northern Iraq, the Kurds, helped by US air strikes, are slowly regaining the ground they lost to IS when it suddenly turned on them last month.

That’s the template the Americans and their allies want to apply to other parts of Iraq, and Syria, but the situation in both countries is complicated by the absence of clear-cut, cohesive local forces on the ground to work with.

Labour leader Ed Miliband said he was “sickened at the disgusting, barbaric killing” of Mr Haines.

The Archbishop of Canterbury, Justin Welby, posted on Twitter: “In every church let us pray for the family of David Haines, evilly killed in the place he was serving in love for its suffering people.”

Senior UK imams and British Muslim community leaders have also condemned the killing, including Shuja Shafi of the Muslim Council of Britain.

He said: “David Haines went out to the region to help the people of the region. That extremists chose to murder him only shows once again the depravity of their warped ideology.

“These extremists in Iraq and Syria claim to be acting in the name of Islam. But there is nothing in our faith that condones such behaviour.

“These extremists wish to draw attention and recruits to their cause by sowing division and fear between people here in Britain. Let us deny them that luxury. The best way to defeat their extremism is to build even stronger bonds between communities here in Britain.”

Paul Rogers, professor of peace studies at Bradford University, said the UK’s natural reaction would be to “go in hard” against IS, but that this presented a problem.

“[Islamic State] actually wants the West to attack it. If it gets that, it can present itself as fighting the far enemy. This presents the British government, or any government in this position, with a real dilemma,” he told BBC Breakfast.

“Do you do what many people in the country would want you to do? But if that’s something your enemy would actually prefer, do you hold back and try other ways?”

Mr Rogers also said the West was now moving into “what is essentially a third Iraq war” and that this time it would extend into Syria. 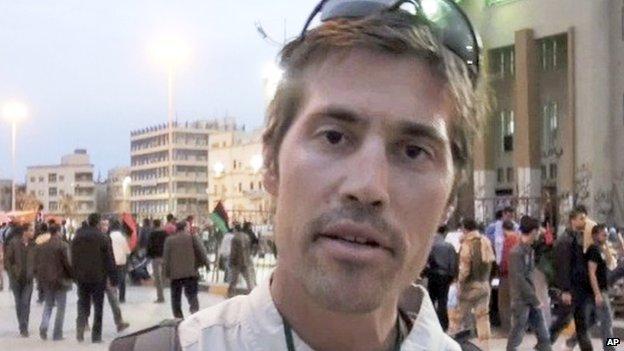 US journalist James Foley was killed by militants last month – his parents called him a “martyr for freedom”. 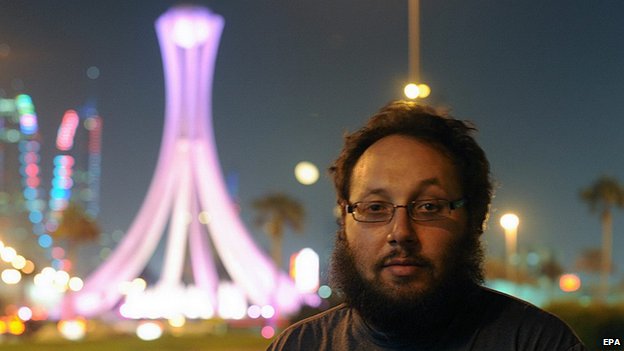 Mr Haines was taken hostage in the village of Atmeh, in the Idlib province of Syria, in March 2013.

He had been helping French agency Acted deliver humanitarian aid, having previously helped local people in Libya and South Sudan.

The release of the video came hours after his family had made a direct appeal to IS to contact them.

IS – also known as Isis or Isil – has seized large swathes of territory in Iraq and Syria and declared a new caliphate – or Islamic state.

Militants from the extremist group have killed two US hostages in recent weeks, posting video evidence on the internet.

They threatened to kill Mr Haines during a video posted online showing the killing of US journalist Steven Sotloff earlier this month.