A spice commonly found in curries may boost the brain’s ability to heal itself, according to a report in the journal Stem Cell Research and Therapy.

The German study suggests a compound found in turmeric could encourage the growth of nerve cells thought to be part of the brain’s repair kit.

Scientists say this work, based in rats, may pave the way for future drugs for strokes and Alzheimer’s disease.

But they say more trials are needed to see whether this applies to humans.

Researchers from the Institute of Neuroscience and Medicine in Julich, Germany, studied the effects of aromatic-turmerone – a compound found naturally in turmeric.

Rats were injected with the compound and their brains were then scanned.

Particular parts of the brain, known to be involved in nerve cell growth, were seen to be more active after the aromatic-turmerone infusion.

Scientists say the compound may encourage a proliferation of brain cells.

In a separate part of the trial, researchers bathed rodent neural stem cells (NSCs) in different concentrations of aromatic-tumerone extract.

NSCs have the ability to transform into any type of brain cell and scientists suggest they could have a role in repair after damage or disease.

Dr Maria Adele Rueger, who was part of the research team, said: “In humans and higher developed animals their abilities do not seem to be sufficient to repair the brain but in fish and smaller animals they seem to work well.” 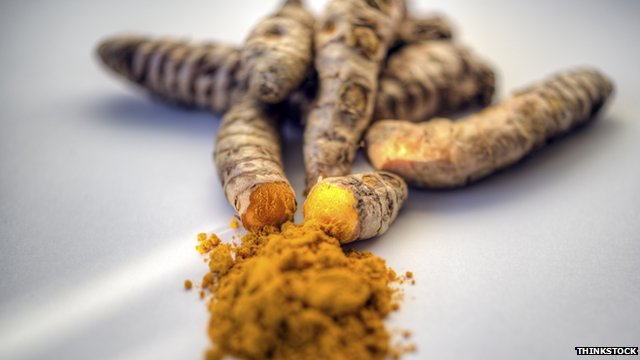 Turmeric belongs to the same plant family as ginger

The research found the higher the concentration of aromatic-turmerone, the greater the growth of the NSCs.

And the cells bathed in the turmeric compound seemed to specialise into certain types of brain cells more rapidly too.

Dr Rueger added: “It is interesting that it might be possible to boost the effectiveness of the stem cells with aromatic-turmerone.

“And it is possible this in turn can help boost repair in the brain.”

She is now considering whether human trials may be feasible.

Dr Laura Phipps at the charity, Alzheimer’s Research UK, said: “It is not clear whether the results of this research would translate to people, or whether the ability to generate new brain cells in this way would benefit people with Alzheimer’s disease.

“We’d need to see further studies to fully understand this compound’s effects in the context of a complex disease like Alzheimer’s, and until then people shouldn’t take this as a sign to stock up on supplies of turmeric for the spice rack.”

Aromatic-turmerone is the lesser-studied of two major compounds in turmeric that may have an effect on the human body.

Previous studies suggest the other compound, curcumin, could reduce inflammation in the body and have anti-cancer benefits.