The UN is formally taking over peacekeeping operations in the Central African Republic (CAR), where about 25% of the population has fled their homes.

No new troops have been deployed to boost the 5,000 African and 2,000 French troops already there.

CAR has been in turmoil since a mainly Muslim rebel group seized power in the majority Christian country in March 2013.

Rebel leader Michel Djotodia resigned in January under intense diplomatic pressure but the killings have continued.

Muslims have fled revenge attacks, with the country now largely split into a Muslim north and Christian south.

A “rehatting” ceremony, in which the peacekeepers swap their green African Union helmets for blue UN ones, was due to have started at 15:00 local time (14:00 GMT).

The new mission is to be known as Minusca from its French acronym.

“Our mission can be summed up in a triptych: to protect the population, back the political process and contribute to the restoration of the authority of the state,” said Minusca chief Gen Babacar Gaye of Senegal.

The UN Security Council has authorised a force of 12,000 and human rights groups say the extra 5,000 troops should be deployed without delay.

“The switch from AU to UN peacekeepers must be more than a cosmetic change: the swapping green berets for blue helmets. Instead it must serve as a fresh start for the peacekeeping operation in CAR,” said Steve Cockburn, Amnesty International’s campaigns deputy regional director for West and Central Africa.

“The gap between the number of peacekeepers promised and the number deployed must be urgently filled. Only once the full force is on the ground, undertaking patrols and protecting CAR’s civilian population, can the UN properly fulfil its protection mandate.” 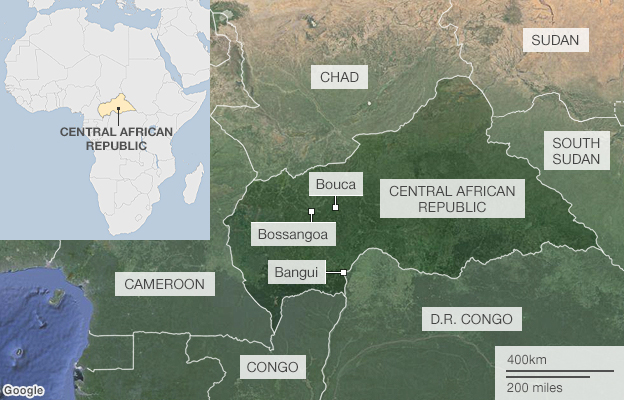 Mother jumps to her death with son on her back