How the world reacted to Brazil’s humiliation

It has been described as a “humiliation for the host nation” and the “biggest shame in history” as Germany inflicted Brazil’s joint heaviest ever defeat to reach the World Cup final.

Germany were 5-0 up within 29 minutes in Belo Horizonte and their 7-1 semi-final victory has left the Brazilian nation shell shocked along with the rest of the football world.

Brazil newspapers have described the thrashing as “shameful” while social media was dominated by reaction from football supporters, players and other sportsman.

BBC Sport takes a look at how the world reacted to the biggest World Cup semi-final defeat in history.

“It’s hard to know whether to give praise to the Germans or criticise the Brazilians for their incompetence. In the opening 10 minutes, Brazil started quite well and it was tight, but after that we saw the most astonishing 80 minutes in World Cup history.

“This isn’t playing against a small nation, this is Brazil, in Brazil. It’s one of the most incredible things I have witnessed. Brazil almost completely collapsed. To concede five goals in 18 minutes in a match of this magnitude beggars belief.

“You have to give the Germans enormous credit, they played brilliant football. They studied Brazil, their weak spots and their weaknesses defensively.

“It was a night of incredulity and you feel sorry for the Brazilian players. It was not like they were arrogant and you felt it served them right. They lost their heads, got out of position and made a real hash of it and the Germans capitalised on that in true German style with great professionalism.

“It has been a long wait for Germany. Twenty-four years since their last World Cup – and I think the wait is coming to an end.”

Rio de Janeiro-based Lance newspaper’s website  describes the defeat as the “biggest shame in history”. It says O Maracanazo does not mean too much now, it is a thing of the past.

“Brazil is slain by Germany and suffers the biggest defeat in their history: 7-1,” writes Brazil news site O Globo.

“Le Desastre” is printed alongside the picture of Brazil’s David Luiz on the front page of France’s L’Equipe.  Luiz is joining Paris St-Germain this summer.

The Daily Star  describes Germany’s win as a “slaughter”. 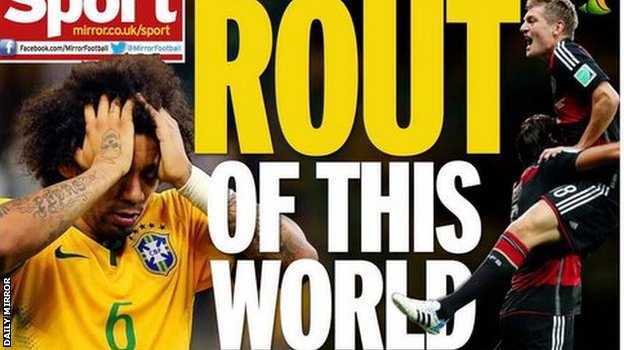 The Daily Mirror  says “humiliation and heartache as hosts Brazil are destroyed by the Germans.”

Germany midfielder Mesut Ozil said:  “What a match! Estadio do Maracana – great to see you again.”

Germany defender Per Mertesacker said: “DIE MANNSCHAFT! I really enjoy this moment… now let’s go all in for the final.”

Former England captain Rio Ferdinand said:  “I hope the Brazilians don’t look for a scapegoat here… it’s a team effort and they weren’t good enough as a group.”

Indian actor Shah Rukh Khan said:  “Sometimes the best of us succumb to the least expected. Life teaches us every time the best are not infallible. Oh Brazil…”

Fifa president Sepp Blatter said:  “Hats off to Miroslav Klose! With 16 FifaWorldCup goals, he is the most prolific scorer in the tournament’s history.”

Scottish FA said:  “Just a quick reminder that our first #EURO2016 qualifier is vs #GER in Dortmund in September. Good. #naeborra.”