Hotels, restaurants and the police station were attacked in Sunday's attack on Mpeketoni

Kenya’s government has urged people to watch World Cup football matches in the comfort of their homes instead of in “crowded and unprotected open places”.

The advice comes after two days of attacks on Kenya’s coast earlier this week left more than 60 people dead.

They started in Mpeketoni as people were watching football on Sunday.

The interior ministry said that although security had been beefed up across the country, bar and restaurant owners should take extra precautions.

Somalia’s Islamist group al-Shabab said it carried out the attacks over two days in and around the town of Mpeketoni in revenge for the presence of Kenyan troops in Somalia and the killing of Muslims. 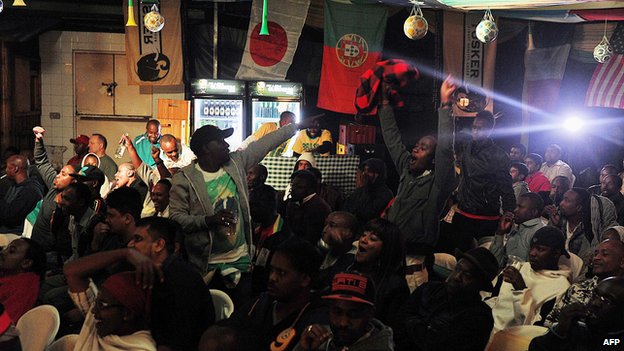 Bars in the capital, Nairobi, were packed with fans watching the opening game last week

But President Uhuru Kenyatta has said “local political networks” were to blame for the violence as members of one ethnic group were targeted.

Most of the dead were ethnic Kikuyus, like the president. Non-Muslims were singled out to be killed.

In some parts of northern Nigeria, public screenings of the World Cup have been banned because of threats by the militant Islamist Boko Haram group.

The militants were blamed for a suicide bombing which killed more than 20 people watching a match in Damaturu on Tuesday.

The interior ministry said Kenyans “should be cautious and vigilant while watching World Cup football matches”.

“Where possible, Kenyans are strongly advised to watch the World Cup matches from the comfort of their homes instead of crowded and unprotected open places,” the statement said.

Bar and restaurant owners should increase security to ensure they are “safe from criminals who may try to take advantage of the World Cup to perpetrate acts of criminality and violence”, it said.

The BBC’s Paul Nabiswa in the capital, Nairobi, says Kenyans regularly go to bars to watch football and the advice will disappoint many fans.

It comes at a time when many foreign governments, including the US and UK, have warned against travelling to the border region with Somalia, Mombasa and the slums of Nairobi, he says.

Kenya sent troops to Somalia in 2011 to help the weak UN-backed government defeat the militants.

Kenya’s opposition leader Raila Odinga, who was prime minister in 2011, has said it is now time to re-evaluate the presence of Kenyan troops in Somalia.

“I don’t think this is enhancing our national security, I would rather that our troops were pulled out and brought along the border to secure our border,” he told the BBC’s Newsday programme.

But he said he did not regret sending forces into Somalia in the first place as Kenya’s tourism industry had been under threat.

The Mpeketoni attacks were the deadliest in Kenya since Somalia’s al-Shabab militants killed 67 people in an attack on a shopping mall in Nairobi last September.

Mpeketoni has long-standing political and ethnic divisions, and correspondents say local ethnic Somalis or Oromos may have targeted them and tried to blame al-Shabab by flying the group’s flag.

Many locals accuse the government of helping Kikuyus get rich by giving them land – the same complaint that was behind the deadly ethnic violence that swept Kenya after disputed elections in 2007.