Sony has confirmed the return of two of its biggest exclusive franchises: Uncharted and Little Big Planet.

Its new PlayStation 4 console will get third-person shooter Unchartered 4 in 2015, while Sack Boy is due to star in Little Big Planet 3 in November.

Sony also announced it would launch a budget console for $99 (£59) this year.

Sony’s E3 games expo event covered more topics than Microsoft’s, but industry watchers were split as to which firm had come out on top.

“I think Microsoft had the better show – it was tighter and more focused,” said Stephen Totilo, editor-in-chief of the games news site Kotaku.

“A lot of the Sony games that we saw were for 2015, and Microsoft did a better job of showing people what they will be getting in 2014.

“E3 is always to some extent smoke and mirrors, and when you’re at the event you have to discern what is real and what is hype.” 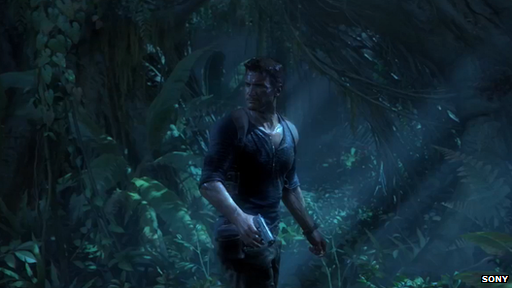 While Sony showed off live gameplay for the Little Big Planet game at the Los Angeles event, it only showed a brief pre-rendered trailer for Unchartered 4: A Thief’s End, and a pre-recorded clip of another big budget title The Order: 1886, also due to go on sale next year.

However, NowGamer writer Adam Barnes had a different take.

“It was probably Sony that came out on top in the end, in spite of the wasted time talking up the benefits of Sony’s TV and entertainment department,” he told the BBC.

“Bloodborne carries a lot of prestige among gamers and the first official unveiling of Grand Theft Auto 5 on a next-gen platform will certainly carry a lot of weight for many.” 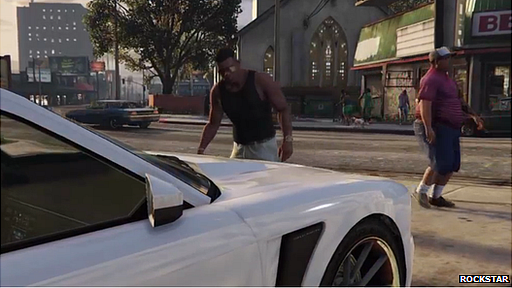 Sony was first to show “new-gen” GTA V footage, but the Xbox One is also getting the title

The PS4 version of crime-themed GTA V is due to go on sale in the autumn, shortly after the 29 July release of another re-mastered title, The Last Of Us.

Sony also announced that add-on content for its game Infamous: Second Son – due out in August – could be bought and played by consumers who had not purchased the original title.

Along with the more family-friendly Little Big Planet 3 – which is compatible with user-created levels for earlier versions of the platformer – the titles will help tackle criticism that several other big-name titles unveiled at last year’s E3 have been delayed until 2015. 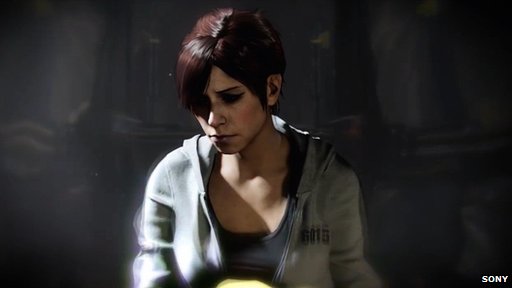 Before Sony’s press event at E3, the company puts on a big open air do – food stands, beer, DJ, the works. In the LA sun. It’s a pleasant way to end a busy day of announcements.

For Sony, it serves another, more useful purpose. Unlike Microsoft’s press conference at 09:30 local time, which has a room full of skipped breakfasts and hangovers, the PlayStation event is packed with excitable, whooping games fans.

But the incessant hollering after every sentence won’t disguise the fact that much of what we saw from Sony tonight will not enter gamer’s worlds until 2015.

Compared to the strong portfolio of titles coming to Xbox One before the end of the year, it could prove to be an Achilles heel.

Yet tipping the battle back in Sony’s favour is the fact that some of its exclusives looked utterly stunning.

A points win for Sony, one analyst told me, though plenty will disagree. 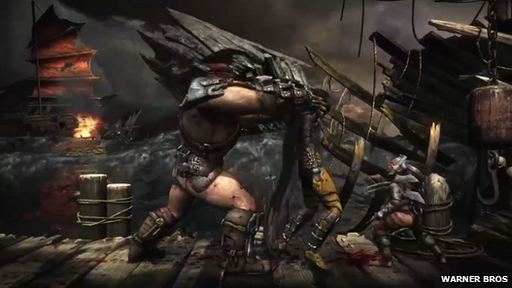 Sony has boasting rights to the fact that it managed to secure first-look gameplay from Rocksteady’s Batman: Arkham Knight, Bungie’s Destiny, and NeatherRealm Studios’s Mortal Kombat X, despite the fact they will all be released on the Xbox One as well. 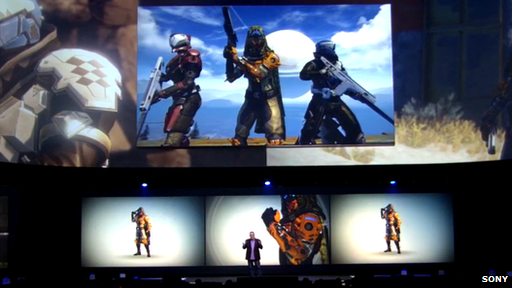 Bungie’s follow-up to Halo, Destiny, was the first game shown at Sony’s event

The Japanese firm managed to surprise its audience with news that it had signed a deal to allow PS4 owners to invite others to play multiplayer battles in another title – Ubisoft’s Himalayas-set actioner Far Cry 4 – even if the “friends” had not bought the software. 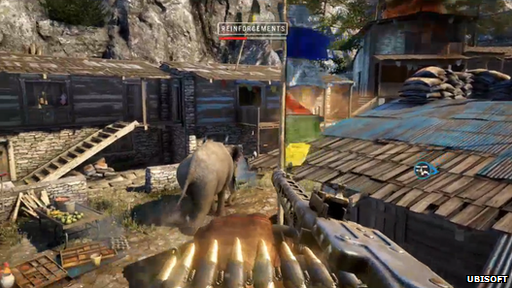 It also drew one of the loudest cheers of the event with news that LucasArts classic 1998 game Grim Fandango was being recreated for PlayStation by Double Fine Productions.

But other elements of its show were less well received. 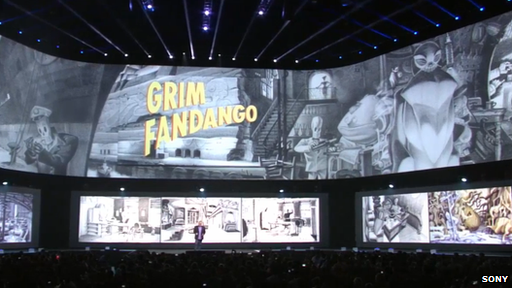 A drawn out promotion for Powers – an in-development detective TV series involving characters with superpowers – only generated scattered applause.

“This is not selling the series very strongly,” blogged Ars Technica in its live coverage of the show. 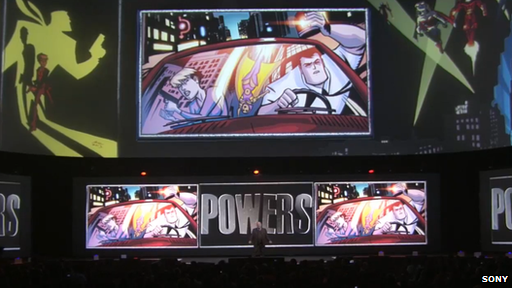 News of an animated movie based on the characters Ratchet and Clank movie had an even cooler reception.

Beyond a quick mention of two new demos for Project Morpheus, Sony’s virtual reality helmet was all but ignored.

The firm instead focused on the North American launch of PS Now in July – a service that will allow PS4s to play games made for older consoles via the internet. It added that the service would be extended to the PS3, PS Vita handheld and selected Sony TVs later in the year.

No mention was made of it coming to other parts of the world. 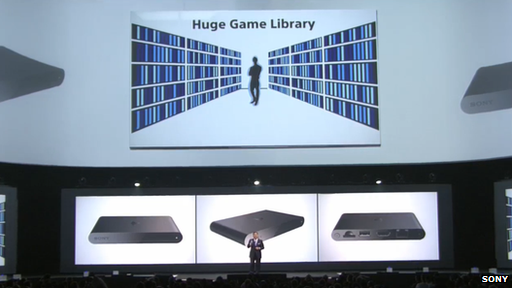 However, Sony did reveal that Europe would be included in the initial launch of the PlayStation TV – a $99 device that can stream games from the PS4 to a second TV in the home, as well as provide access to Sony’s online content including movies and PS Now, where available.

Mr Totilo was not impressed.

“I think the PlayStation TV is a confusing product,” he said.

“Sony TVs are now playing PlayStation games, the PlayStation TV is playing backwards-compatible games – I think if I was the consumer I’d be in a muddle about which of Sony’s many different devices is the one that I need.”

The audience proved more receptive to some of the indie games on show. 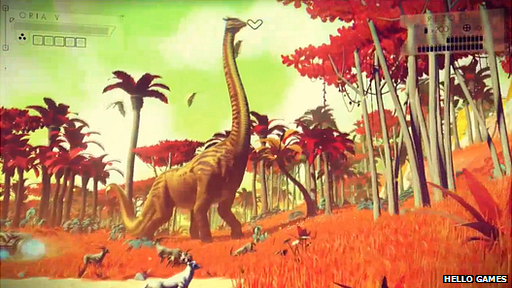 Despite the giant scope of No Man’s Sky, it was developed by a four-person team

UK-based Hello Games was widely praised for its promo of No Man’s Sky – a title involving a universe containing an “infinite” amount of planets. 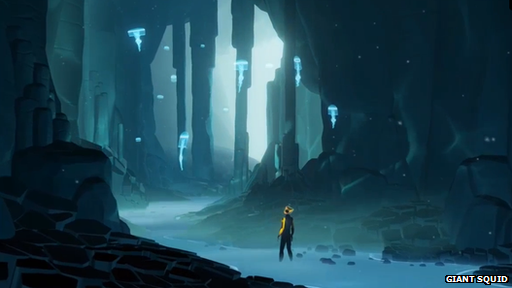 However, there was no mention of The Last Guardian – a game first announced by Sony at E3 five years ago, which the firm recently stressed had not been cancelled.

Use science and technology to transform economy – Mahama