Commission for new regions to hold final hearing in Accra

Justice S. A. Brobbey heads the commission of inquiry into the creation of new regions

The Commission of Inquiry collating views and justifications for splitting of some regions in the country, has announced that it will hold its last sitting in Accra from 5th to 10th April 2018 at the Accra International Conference Centre.

According to the Commission, it has completed the public hearings in the proposed regions which include Northern, Volta, Western and Northern Regions.

The statement said the “hearings are to afford those who were unable to appear at the regional public hearings, but who would still want to make submissions to the Commission an opportunity to do so.”

The Commission of Inquiry into the Creation of New Regions commenced work after its inauguration by President Nana Addo Dankwa Akufo Addo, on 19th October 2017.

After the Commission’s work, part of the Northern Region is expected to be a new region, as well as the northern part of the Western Region, splitting of the Brong Ahafo Region, and Oti Region to be carved out of the Volta Region.

The Commission was tasked to establish whether there was a need and substantial demand for the creation of  the new regions, based on petitions received by the President, and advice from the Council of State as required by Article 5 of the 1992 Constitution.

“The first phase involved consultations with the Chiefs and Opinion Leaders who had submitted petitions to H.E President Nana Addo Dankwa Akufo Addo. These consultations were in-camera at the Castle, Osu, from 21st to 29th November and 5th December, 2017.”

The Commission subsequently held public hearings in all the affected regions.

The Commission in the statement also said apart from the hearings, any member of the public who wishes to submit a memoranda to the Commission, could do so “by forwarding hard and soft copies to the Secretary, Commission Of Inquiry Into The Creation Of New Regions, Castle–Osu, Accra or via *Email: [email protected] on or before close of work, Friday, 13th April, 2018.”

Below is the commission’s schedule in Accra: 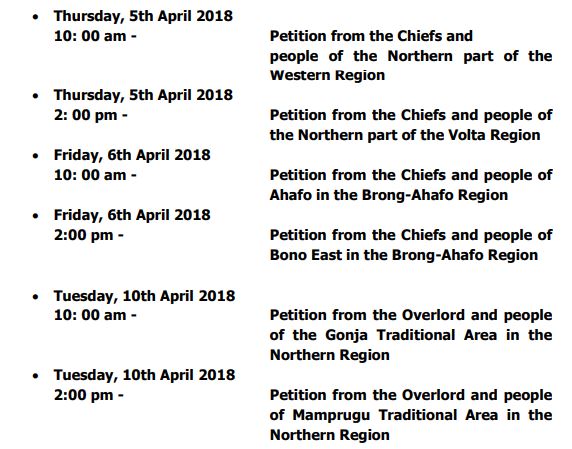 Click here for the full statement from the Commission