A group calling itself the Techiman Youth Association in the Techiman Municipality of the Brong Ahafo Region, on Sunday embarked on a peaceful demonstration on the principal streets of Techiman against the activities of  spiritualists, mallams and money doublers, accusing them of taking advantage of unsuspecting and gullible residents to defraud and dupe them of their monies and investments in the municipality.

The demonstrators, clad in red and black apparel, wearing red bands, chanted war songs and held placards some of which read “We Must Drive All Fake Mallams Out, “We Need Investors in Techiman”, “Techiman People Need a peaceful Life”, “Enough of the Ritual Killings, Save us Mr. President”, “Nananom and Security Save us Now”. 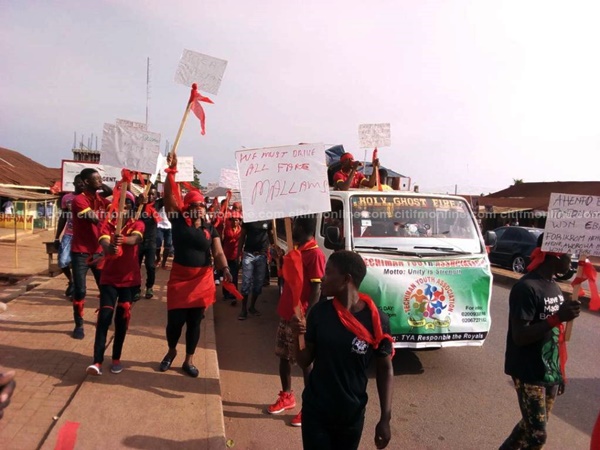 The Chairman of the Association, Mr. Kwadwo Adjei, in a Citi News interview said the operations of the alleged mallams, fake spiritualists and internet fraudsters, are amassing wealth from innocent people in the municipality, and they assault the same residents after failing to deliver on their promises.

“The whole Ghana mallams have invaded Techiman and they dupe the unsuspecting public and what is disturbing is that they collect monies from people and beat or assault them in the end. They bath you with their concoctions and ask you not to scratch your body for the money, knowing very well your body will itch after bathing the concoction. After the failure of the charm, if you go for the refund of your money, their macho men will beat you. These macho men are in Techiman and have close links to the palaces and chiefs in the area and when they are coming, they will shout, and then the palace guards and victims get scared and run for their lives for them to share the booty with the chiefs”, he lamented.

He said the demonstration was to bring to the notice of chiefs in the area the activities of these miscreants.

“Techiman is a cosmopolitan town that needs to attract more investors to create the necessary job opportunities for the youth for sustainable development”, he added.

Mr. Adjei said the Association was not against the practice of religious groups as guaranteed in the constitution, but the activities of these charlatans in Techiman is troubling and must be regulated and checked.

He therefore called on the Techiman Traditional Council and the security agencies to up their game in protecting the investments of law-abiding citizens in the area.

The Brong Ahafo Regional Regulatory Officer of the Traditional Medicine Practitioners Council (TMPC) of the Ministry of Health (MoH), Iddrisu Awudu, in an interview debunked assertions from some of the mallams that their operations and activities had been licensed.

“We regulate and license herbal practitioners to produce medicine to heal the sick and there is no license from government to any person or group of persons to operate as money doublers. So if anyone goes round to say he has been given license to double money, then that is not right”, he emphasized.