Huawei P20 Pro smartphone ‘can see in the dark’

Huawei’s latest smartphone can take photos in near-dark conditions without using its flash or a tripod.

The P20 Pro takes exposures lasting up to six seconds to get enough light.

It then uses artificial intelligence to deliver sharp images and avoid the blurring and smearing normally associated with employing this technique handheld.

The Chinese company recently told the BBC it could soon become the world’s bestselling smartphone brand.

At present, it is in third place behind Samsung and Apple, with US telecom networks’ refusal to sell its handsets proving an obstacle.

Like Samsung’s Galaxy S9-series phones – which recently went on sale – Huawei’s pitch to consumers for the P20 Pro is largely based on its new camera capabilities.

But while the South Korean company’s S9+ made the leap to having two lenses on its rear, the P20 Pro is distinguished by being the first mainstream phone to feature three.

“Huawei doesn’t have the brand Samsung or Apple have, so it’s almost had to go the extra mile in terms of the product,” said Ben Stanton, from the technology consultancy Canalys.

“And it’s nice to see it taking the lead with some of the hardware it’s producing.

“But the thing with camera technology is that unless you are looking at side-by-side comparisons [of photos] it can be very hard to tell which device is better.

“So, Huawei has its work cut out to sell some of the new features.”

The main sensor has an unusually high resolution of 40 megapixels.

But it uses “light fusion” software to combine data from groups of four adjacent same-coloured pixels to produce 10MP photos. 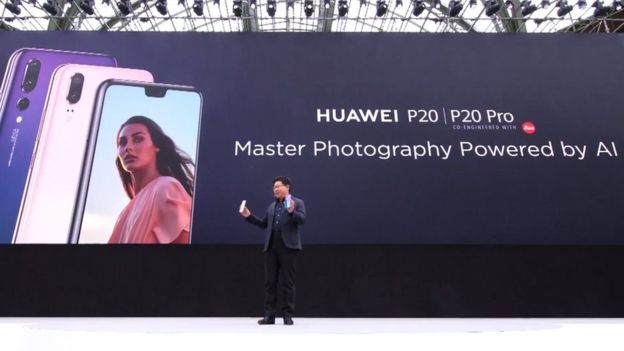 The benefit is that images taken in low-light conditions should be less “noisy” as a consequence.

“If you had an area of a table and put 40 little buckets on top and it was raining, it would take a longer time to get an inch-worth of rain in the bottom of each than it would if you had 10 buckets four times the size,” said marketing manager Peter Gauden.

“And that’s essentially what we are doing. Using light fusion to combine four smaller pixels together to make a much larger pixel, and therefore enhance our capability of absorbing light into the sensor.”

The facility can be switched off, however, if the owner wants 40MP snaps.

The two other cameras are:

The P20 Pro uses object-recognition technology to automatically adjust its settings to suit each subject, and then catalogue the imagery, which it can do without having to send data to the internet.

In addition, the software makes composition suggestions when appropriate – such as when to adjust the phone to keep it level with the horizon, or to loosen or tighten a shot.

Like the Galaxy S9, the P20 Pro has a super-slow mode in which 960 frames per second can be filmed at 720p “high-definition” resolution.

But it also offers its unique long-exposure trick.

To achieve this, Huawei says, the device uses its ability to distinguish objects to find the optimum frame for each item contained in a shot.

It then takes information from other frames to improve the definition of each object, while ensuring that edges do not become blurred as a consequence.

Finally, all the digitally finessed items are merged together to create a single photo.

As a result, a photo of the inside of a dim bar, for example, can end up looking brighter and more detailed than it appeared to the human eye.

But quirks can occur.

In one test by the BBC involving a person stood against a dim background, the frame selected of their face had them blinking despite the fact their eyes had been open for most of the six-second exposure.

Huawei narrowed the gap with Apple last year, despite coming under pressure from other Chinese technology companies, including Oppo, Xiaomi and Vivo.

However, efforts to crack the US market have been frustrated by AT&T and Verizon pulling out of talks to sell its devices.

Reports suggested local politicians had pressured the telecom operators to turn their backs on the company because of concerns it had ties to the Chinese government.

Richard Yu, chief executive of Huawei’s consumer products division, told the BBC that the Americans feared his company was “too competitive [and] too strong”. 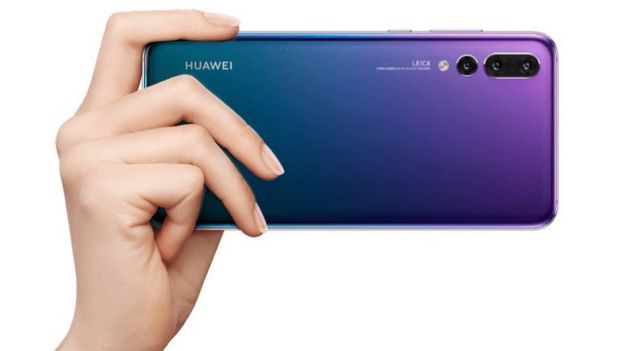 One industry-watcher, who is impressed by the new phone, said that was not necessarily good news for its rivals.

“Huawei is going to throw everything that it’s got at Europe now, because it needs to make up the sales volume expectation that it had in the US,” said Ben Wood, from CCS Insight.

“Other smartphone-makers should be seriously concerned that the threat it poses has just been dialled up a whole order of magnitude as it’s just released up resources and money to resolve some of its brand issues.”