Former President John Mahama has criticized the Akufo-Addo government for its inability to stabilize the price of petroleum products to the satisfaction of Ghanaian consumers.

Mr. Mahama also warned that the high price of fuel, particularly Liquefied Petroleum Gas, had long-term degrading effects on the environment because of the cheaper, but more destructive alternative of charcoal.

[contextly_sidebar id=”Lw42bZ6V4XmqGv71Excq4qdLKlcIBjWD”]Speaking at the latest in the series of National Democratic Congress unity walks in the Eastern Region, he reminded the New Patriotic Party of its promise to relieve Ghanaians of such burdens.

“We were told that it [petrol] was too expensive and that 50 percent of the petrol was made up of taxes alone and that when they win and come into office, they would remove the taxes so that petrol will [be cheaper]. Today petrol is selling at GHc 22 per gallon.”

“I am even more concerned about LPG because LPG was about GHc40 before December 7. Today LPG is more than GHc80. What it means is that for those who cannot afford LPG, they will go back to using charcoal and we all know the implications of using charcoal. When you use charcoal, it degrades the environment and so government should do something about the price of LPG particularly,” the former President stated.

Mr. Mahama further called on the government to do more to relieve consumers of the pressure.

“We [the NDC government] managed to stabilize the price of fuel in 2016 before we left. Even though we had deregulated, we found a way of making sure that prices remained stable. Now the extent to which [the price of fuel] keep going up is a worry, and so I think it  is something that government should look at.”

Situation on the ground

Checks by Citi Business News at some major Oil Marketing Companies showed that petroleum prices dropped by less than GHc1 at the pumps after Parliament passed the Special Petroleum Tax Amendment Bill to reduce that much-criticized tax from 15 percent to 13 percent.

The likes of Total, Shell and Goil were selling at a litre of Petrol at GHc 4.51. This represented a 3.5 percent reduction from the earlier GHc4. 67 pesewas.

Similarly, the price of a litre of diesel dropped from GHc4.67 to GHc4.49.

This meant the average price of a gallon of petrol and diesel at the pumps was about GHc 17, despite Former President Mahama’s assertion that the a gallon of fuel was around GHc 22.

The amendment to the tax followed recent protests on the rising cost of fuel, as well as calls from the minority for the Special Petroleum Tax to be scrapped. 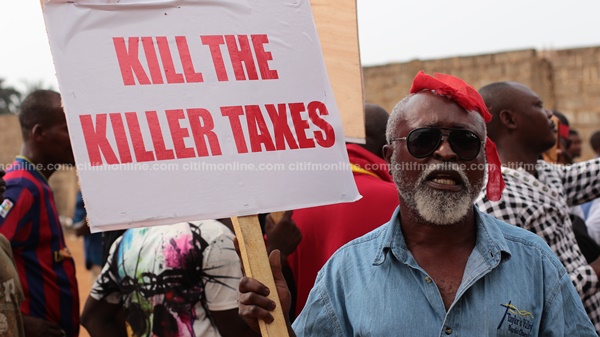 The reduction did little to assuage the fears of some observers like the Institute of Energy Security (IES) and Dr. Charles Wereko Brobby, who slammed the reduction as insignificant.

The observers insisted that the Special Petroleum Tax should be scrapped completely.

About the Special Petroleum Tax

The Special Petroleum Tax Law was passed in 2014 as part of tax measures adopted by the government at the time to increase revenue generation and improve efficiency on revenue collection from petroleum products.

The law authorizes the Ghana Revenue Authority to collect the tax, which would be paid into the Consolidated Fund.

The petroleum products to be affected, according to the Finance Ministry include petrol, diesel, liquefied petroleum gas, natural gas and kerosene.