Ghc800m for police; helicopters, drones in the offing- Nana Addo

President Akufo-Addo has indicated that, the government is allocating some GH¢ 800million to the Ghana Police Service to ensure improvement in its operations.

He said the amount will be used for the procurement of modern policing equipment and gadgets including helicopters and drones to enhance the capacity of the service in dealing with crime in the country.

[contextly_sidebar id=”2ULD4s4FHDMXJTWt8MlYxqdM0X7e6tXG”]In his 2018 State of the Nation Address, President Akufo-Addo said the government is committed to resourcing the police with the necessary equipment to ensure that it carries out its mandate of enforcing law and order in the country.

“The police, the prosecution services and the judiciary owe it to all of us to make us feel and be safe. I do not need to repeat that crime wears no political colours, and I am certain that message has gone down to all…The law enforcement agencies will crack down very hard on all those who would disturb the peace of our nation…We will give the Police the resources they need to do their job,” Akufo-Addo said. 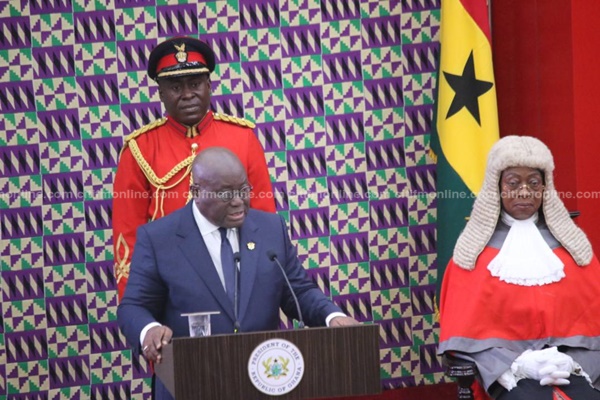 “An initial amount of GH¢800 million is being made available to procure and supply, within the next six months, critical, modern policing equipment and gadgets to enhance the capacity of the police to enforce law and order… In the medium to long-term, we will purchase drones and helicopters to assist the police combat violent and environmental crime. The crime laboratories will be modernized, and properly equipped to provide the necessary support,” he added.

The government has come under intense criticism over the increasing spate of crime and lawlessness in the country especially by groups affiliated to the New Patriotic Party (NPP).

Other instances of violent attacks have also been carried out on police stations in various parts of the country including the Kwabena District Headquarters Police station last month, where a police officer on duty was shot dead and criminals in police custody were freed.

Some security analysts have suggested that the country’s security agencies are not adequately resourced to the increasing level of crime especially in the country’s urban spaces.

But President Akufo-Addo believes that the government’s investment will ensure the service is up to the task in dealing with crime.

He said the government’s commitment will ensure the police take delivery of new ammunition and vehicles to improve its responsiveness to crime situations.