The Director-General of the Ghana Broadcasting Corporation (GBC), Dr. Akuffo Annof-Ntow, expects the collection of TV licenses to extend to persons who consume Television content via mobile devices and applications.

Speaking to Citi News following the setting up of a special TV Licence Court to deal with TV license fee defaulters, he said “ultimately, the laws will extend to those who consume that content on mobile applications.”

[contextly_sidebar id=”XK8Sz811Bp8e1iLO4S4YtaDEGle5RasQ”]”The fact that you are consuming it on a mobile application doesn’t mean the content is not being paid for or it’s not being generated by somebody. Once it is being generated, it has to be paid for.”

The reintroduction of the license has been met with concerns over whether the levy is for TV ownership or the content produced by the state broadcaster.

In an attempt to clear the air, Dr. Annof-Ntow explained that the license is to cover content and not ownership of TV sets.

But this will be viewed as contradictory by some, given the TV Licence online portal FAQs note that the levy is “for installing and using a Television receiving set and not for content or programmes.” 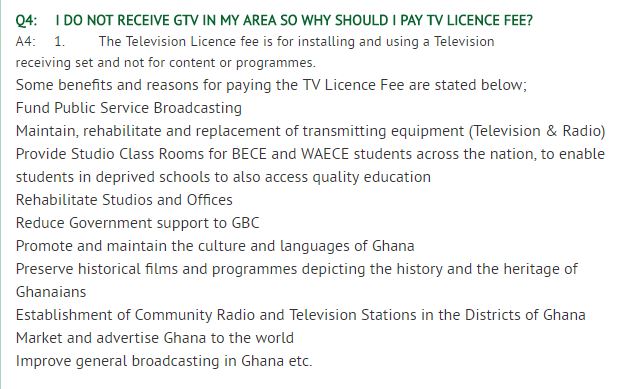 TV licenses in other countries

A comparison with other countries indicates that the licence is levied on persons who own TV sets.

In South Africa for example, its Broadcasting Act notes that any person or entity with a TV set is to pay the license irrespective of whether a television set in one’s possession is used or not.

South Africa also defines a TV set as “any device designed or adapted to be capable of receiving a broadcast television signal. That includes a PC fitted with a TV tuner card, or a videocassette recorder (VCR) connected to a monitor or TV screen.”

In the UK, any person who watches or records live TV programmes on any channel, including downloads or watching BBC programmes on the iPlayer, has to be covered by a TV Licence. This includes tablets, mobile phones and other portable devices with streaming capabilities.

Following the setting up of the special court, it is expected that defaulting TV owners or operators will be prosecuted per Section 1(a) of the TV licensing Act 1966 (NLCD 89).

It says, “Any person who contravenes any provision of this law or regulation shall be guilty of an offence and shall be liable on conviction to a fine or to imprisonment for a term not exceeding one year.”

Domestic TV users are to pay between GH¢36 and GH¢60 for one or more TV sets in a household while TV set repairers and sales outlets are to pay an annual sum of between GHc60 to GHc240.

Commercial TV operators are to pay GHc36 per annum for each TV set.