US President Donald Trump has shown no abnormal signs following a cognitive exam and is in excellent health, his White House doctor says.

“I have no concerns about his cognitive ability or neurological functions,” Ronny Jackson said on Tuesday.

Last week, Mr Trump, 71, had a three-hour examination in his first medical check-up since becoming US president.

It comes after the release of a controversial book fuelled speculation about the president’s mental health.

Speaking to reporters during a White House briefing on Tuesday, Dr Jackson said that the president’s overall health was “excellent”.

“All data indicates the president is healthy and will remain so for the duration of his presidency,” he said.

“He continues to enjoy the significant long-term cardiac and overall health benefits that come from a lifetime of abstinence from tobacco and alcohol,” he added.

When asked by a reporter how a man who consumes fried chicken and Diet Coke and does not exercise could be in good shape, Dr Jackson replied: “It’s called genetics… He has incredible genes.”

However, Dr Jackson added that Mr Trump could benefit from a lower-fat diet and more exercise.

On Friday, the president was examined by military doctors at the Walter Reed Medical Center in Bethesda, Maryland, in tests that were said to have gone “exceptionally well”.

Among them was Dr Jackson, whose official title is Physician to the President.

A rear admiral in the US Navy, he also tended to Mr Trump’s predecessor, Barack Obama.

To check for possible cognitive dysfunction, the US Department of Veterans Affairs uses the Montreal Cognitive Assessment (MoCA) neuropsychological test.

The MoCA test assesses an individual’s attention and concentration, memory, language, conceptual thinking, calculations, and orientation – among other functions. 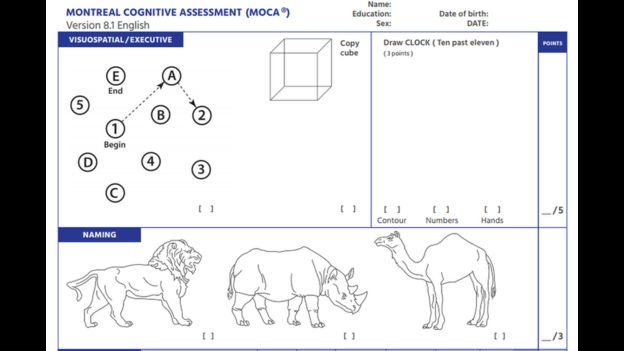 Questions have been raised about the president’s cognitive ability, particularly with the publication of Michael Wolff’s book, Fire and Fury: Inside the Trump White House.

Some neurological experts had compared earlier clips of Mr Trump speaking with more recent instances in which he had used fewer words and appeared to ramble.

Wolff has alleged the president is intellectually incapable of carrying out his role and questioned his mental fitness. He claimed all of the president’s White House aides saw him as a “child” who needed “immediate gratification”.

In December 2015, Mr Trump’s own long-time doctor, Harold Bornstein, declared in a pre-election assessment that his client would be the “healthiest individual ever elected to the presidency”.