The Speaker of Parliament, Prof. Mike Aaron Oquaye, has set up a five-member committee to investigate claims that the Trade Ministry extorted $100,000 from expatriates to allow them to sit close to the President during the Ghana Expatriates Business Awards held in the country.

According to the Speaker, the Committee is expected to submit its report to the House “as soon as possible, one day after our recall which is 24th [January 2018].”

The Committee has three members of the Majority namely Ameyaw Kyeremeh, Majority Chief Whip, who will Chair the Committee, Dr. Assibey Yeboah, Chairman of the Finance Committee of Parliament, and Yaw Buabeng Asamoah, MP for Adentan.

On the Minority side are James Klutsey Avedzie, Deputy Minority Leader, and Dominic Ayine, the MP for Bolgatanga East.

On why the Speaker of Parliament allowed the motion to pass despite the irregularity concerns raised by the Majority, Prof. Oquaye said he does not want the Parliamentary processes to be abused.

“…We should be careful of the rights provided us so that it does not become a tool for promoting that which is frivolous, vexatious or otherwise an abuse of the process of Parliament. Our good nation cannot be allowed to sink into insecurity and confusion, and that is why I have allowed this to come on notwithstanding the incompetence in irregularities.”

Members of Parliament were recalled from recess for a special sitting  today, Friday, over the issue upon the request of the Minority Chief Whip, Muntaka Mubarak.

Muntaka had prayed the House to set up an adhoc committee to investigate the matter, adding that “It is important that these matters are investigated properly…I believe that as a House we will do what we think is right.”

This committee has become necessary despite President Akufo-Addo declaring that there was no wrongdoing, after he tasked Trade and Industry Minister, Alan Kyeremanten, to offer him some explanations.

Prior to the formation of the committee, there were heated arguments from both sides of the Chamber over the motion when the Majority Leader, Osei Kyei Mensah-Bonsu raised issues with the letter accompanying the motion.

The Majority Leader had disclosed that, Muntaka’s name was not part of the MPs who signed the letter accompanying the memorandum, adding that 28 of the MPs who were said to have appended their signatures did not do so, but only had their names captured on the letter.

He described it as a “clear case of misrepresentation” because the letter said the “under listed have appended their signatures.”

Osei Kyei Mensah-Bonsu further noted that, some of the Minority MPs including Collins Daudu, Eric Opoku, Oko Vanderpuije, Zanetor Agyeman Rawlings, Inusah Fuseini, Alban Bagbin among others, have all not appended their signatures to the memo.

“There are many more names listed, and we are being told they have appended their signatures but they have not.”

Osei Kyei Mensah-Bonsu further described the motion as “incompetent” and thus called for it to be rejected by the Speaker of Parliament.

“So the issue that I raised has to do with misrepresentation and it will be a gross abuse of the processes to come and pray. The second item is that, we should come and correct votes and proceedings. Mr. Speaker, the young indeed shall grow. On the allegations, we have heard the claims put in the public domain. Today, we are witnessing a shift of goal post. The motion before us has nothing to do with extortion.”

“Mr. Speaker, you will notice that I have not attempted to respond to the issue…I’ve not gone into what they are saying…because the motion itself does not talk about that. This is incompetence. They should learn the procedures of this house.  Their motion has very wobbly legs. This is a very incompetent motion that has been submitted. So I will urge and pray that you dismiss this. When they come properly even today, we are ready to debate them,” he added.

Incensed by the claims however, Muntaka insisted that the motion was competent, adding that “it is most shocking and very disingenuous for the Majority Leader to even imagine that what was done was wrong.”

“My colleague the Majority Leader thinks he is smart. He should read the laws well. The request is in the memo and that is where my signature is,” he argued.

Minority Leader, Haruna Iddrisu, also joined the argument, saying the motion in his possession had enough signatures to fulfill the requirement for such motions.

In his ruling, the Speaker of Parliament described the issues raised on the motion as “procedural irregularities” and suspended the House for 30 minutes in order to have the issues rectified. 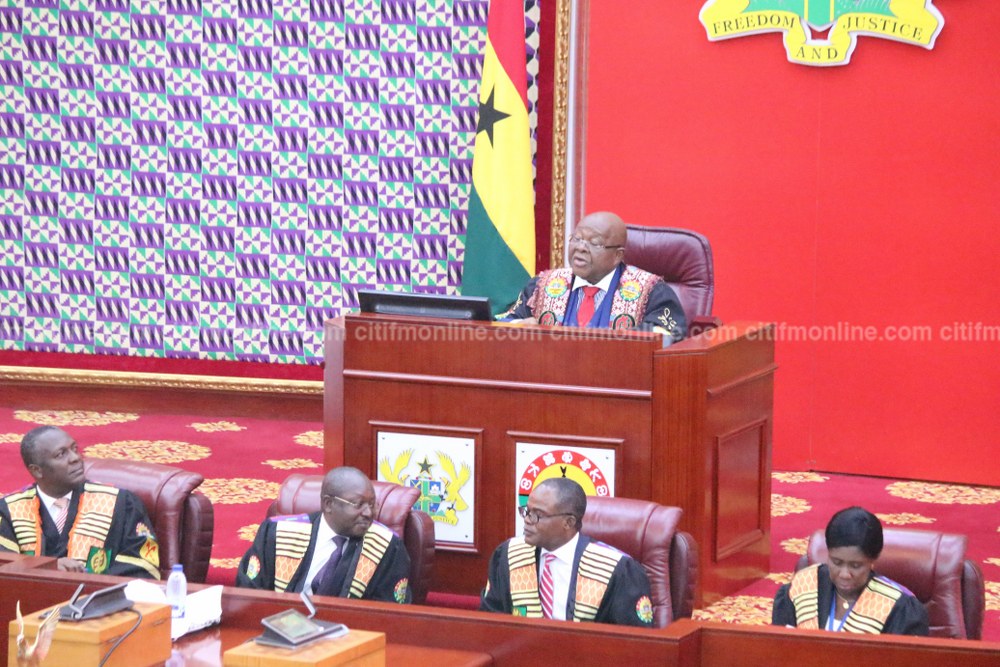 “…Those applicants cannot determine the agenda for the House. The business of the house is done by the Executive. When you say I’m forwarding this on behalf of the applicants herein, and the application is attached, it is a procedural irregularity. This matter is a matter of grave importance. The procedural irregularities are being stated so that it must not be repeated. I will therefore direct the House to break for 30 minutes for the procedural irregularities to be corrected. As for those who did not sign it, it is neither here nor there. As far as the number of people required sign, it is so signed. We will suspend the House for 30 minutes and deal with the composition of the actual committee.”

The Minority Chief Whip, Muntaka Mubarak, first made the extortion allegation in Parliament.

Mr. Mubarak said the fees charged at the Ghana Expatriate Business Awards (GEBA) were not approved by Parliament, adding that the monies were also not accounted for in the Internally Generated Funds [IGF] of the Ministry’s accounts.

The issue was further reinforced by Mr. Ablakwa, who suffered verbal assaults from Deputy Minister for Trade and Industry, Carlos Ahenkorah over the matter.

The Ministry of Trade and Industry initially dissociated itself from these allegations.

The Trade Ministry, in a statement said it played no role in determining prices for seats at the event, and clarified that it only facilitated the implementation of a new initiative by the Millennium Excellence Foundation.

But the Ministry after an order from the President to probe the matter, clarified that an amount of GHc 2,667,215 was realized from the event.

The organizers of the Awards had also explained that no one paid to sit close to the President, and that the amount raised was gotten from sponsorship through a fundraising at the event.