The Second Lady, Samira Bawumia, has offered some assurances concerning the recovery of the Vice President, Dr. Mahamudu Bawumia, who is on a medical leave in the United Kingdom after suffering from a yet-to-be-disclosed ailment. 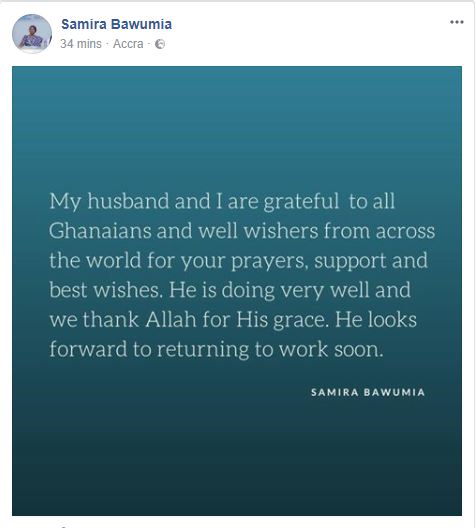 Dr. Bawumia left Ghana for the United Kingdom last week Friday on medical leave after the Presidency revealed that he had been taken ill earlier in the day, and was undergoing medical tests.

The Information Minister, Mustapha Hamid, has since provided some further clarity saying the decision to fly Dr. Bawumia to the UK,  was to ensure that he was kept away from visitors who may disturb his rest and recuperation period.

The government is yet to indicate the exact ailment the Vice President may be battling with, and this has prompted some criticism with the Minority in Parliament calling for more clarity from the Presidency on the matter.

Speaking on the Floor of Parliament,  the Minority Leader, Haruna Iddrisu, criticized the government over its communication of what he described as a “sensitive matter.”

But Mr. Hamid followed this up with a further assurance that Dr. Bawumia will soon return to the country, saying “he [Bawumia] is doing very well. The Chief of Staff and other senior government officials have been talking to him.”

Meanwhile, the Majority Leader in Parliament, Osei Kyei Mensah-Bonsu, says the Minority’s calls for full disclosure of the medical condition of the Vice President, Dr. Mahamudu Bawumia, are hypocritical.