The Kumasi Central Police Command, on Thursday, January 11, intercepted a bus heading to Niger from Kumasi loaded with substances suspected to be Indian Hemp.

The bus was loaded with goods from the Boko Station in Kumasi and was intercepted at Buoho in the Afigya-Kwabre District of the Ashanti Region.

Briefing the press on the arrest, ACP Nuhu Jango, the Kumasi Central Police Commander, said 47 parcels the suspected narcotics were found in a large compartment under the car following a tip-off. 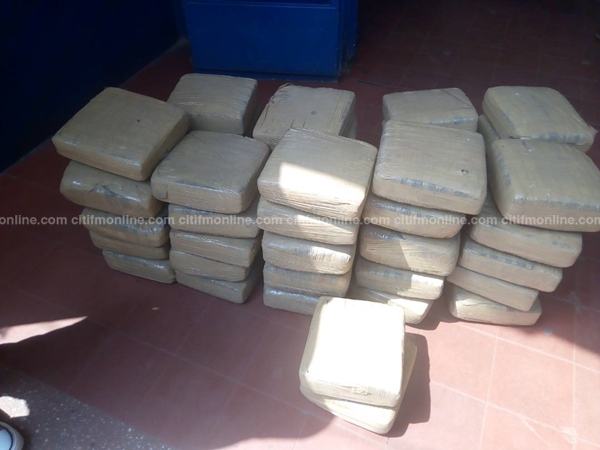 The driver Zack Yakubu, 37, and his mate Adamu Zibo, 30, have been arrested and are in police custody and assisting with further investigations.

The nationality of the two suspects has yet to be confirmed.

The vehicle was first impounded following which a thorough check for the suspected narcotics was conducted the next day [Friday, January 12].

“We did not get any positive results [initially] but our intelligence was that there were substances suspected to be narcotics in the bus and that it was concealed somewhere under the back left tire. A compartment had been created there,” ACP Jango.

The police eventually found the compartment under the vehicle and were able to retrieve “well-compressed leaves suspected to be Indian hemp.”

“There were 47 parcels and we have retained those parcels. Our intention is to send them to the lab to confirm whether they are indeed narcotic drugs or otherwise,” ACP Jango stated.