A suicide bombing has killed at least 95 people and injured 158 others in the centre of Afghanistan’s capital, Kabul, officials say.

Attackers drove an ambulance laden with explosives past a police checkpoint into a street that was only open to government workers.

It happened near the old interior ministry building and offices of the European Union and High Peace Council.

The Taliban have said they carried out the attack, the deadliest for months.

A week ago, Taliban militants killed 22 people in a luxury Kabul hotel.

Witnesses say the area – home to foreign embassies and the city’s police headquarters – was crowded with people when the bomb exploded on Saturday at about 12:15 local time (08:45 GMT). Plumes of smoke were seen from around the city.

Officials said the death toll would probably continue to rise as casualties were brought to hospitals for medical attention.

The International Committee of the Red Cross said the use of an ambulance was “harrowing”.

This is the deadliest attack in Kabul in several months.

In October, 176 people were killed in bomb attacks across Afghanistan in one week. The country’s security forces in particular have suffered heavy casualties at the hands of the Taliban, who want to re-impose their strict version of Islamic law in the country.

In May, 150 people were killed by a suicide bomb attack in Kabul. The Taliban denied any role, but the Afghan government says its affiliate, the Haqqani group, carried it out with support from Pakistan. 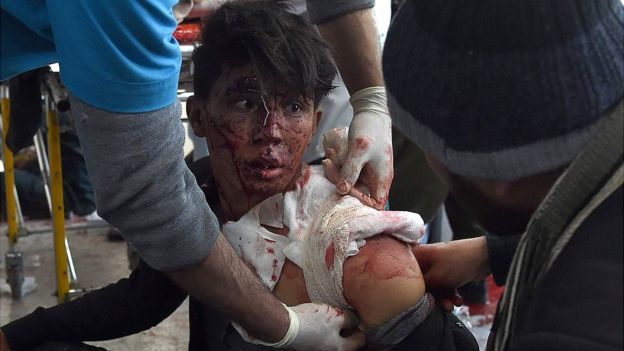 Pakistan denies supporting militants that carry out attacks in Afghanistan. This month, the US cut its security aid to Pakistan, saying it had failed to take action against terrorist networks on its soil.

The Taliban control large swathes of Afghanistan and parts of neighbouring Pakistan.

They were ousted from power in Afghanistan after a US-led invasion in 2001 but returned to run some key areas.