The annual Ghana Rugby Club Championship (GRCC) semi-finals were concluded in Accra when Conquerors Sporting Club (Conquerors) and Accra Rugby Club (ARC), managed to sail through to the finals with victory margins of 40 and 44 respectively in the Men’s Fifteens section of the GRCC.

In the Women’s Sevens section, Dansoman Hurricanes Ladies and Conquerors Ladies, secured a spot in the final by beating Cosmos Buffalos Ladies and Griffons Ladies respectively.

The losing teams will face each other in the third place playoffs prior to the final matches with Dennis Foundation RFC facing Lions RFC in the men’s 15s section, while Cosmos Buffalos Ladies and Griffons Ladies will tackle each other in the women’s sevens section.

The President and Board Chairman of Ghana Rugby, Mr. Herbert Mensah, said that he was fully briefed while en route from Europe to Accra on the day’s matches, and is both very satisfied with the outcome and very sad about the display of indiscipline.

“Ghana Rugby has come an enormous way from when my administration and I took over in June 2014, and the fact that we could host a domestic league that included both a ten team men’s fifteens, and four team women’s sevens section is remarkable and probably ground-breaking at the same time,” Mensah said.

Mensah also referred to the fact that two players were sent from the field for transgressions of World Rugby’s Regulation 17 on foul play, and said that the GRFU will refer the incidents to its Judicial Officer, Mr. Chester Anie, for investigation and adjudication.

“Foul play is not on the list of Ghana Rugby’s values, and offenders if found guilty, will be dealt with to the fullest extent of the laws and regulations of Rugby,” Mensah said.

The Match Commissioner for the semi finals, Mr. Abdul-Aziz Issah, said that the quality of play from all the clubs has dramatically improved. He attributed this partly to the fact that the GRFU ensures that clubs, players and all adhere strictly to World Rugby rules and regulations.

Mr. Rob Oram, head coach of Accra Rugby Club, said that they were delighted to reach the finals of the GRCC for the first time in the history of the Club.

Conquerors SC will be in the finals of the GRCC for the third consecutive year, after having won the domestic league in both 2016 and 2017.

Head Coach of Conquerors SC and of the Ghana national Rugby team, the Ghana Eagles, Mr. Lovemore ‘Dallars’ Kuzorera, said that they worked hard to reach the finals again.

“It was a tough match. Conquerors started off well with high intensity and put pressure on the Lions, forcing them into making mistakes and we capitalized by scoring early tries.” 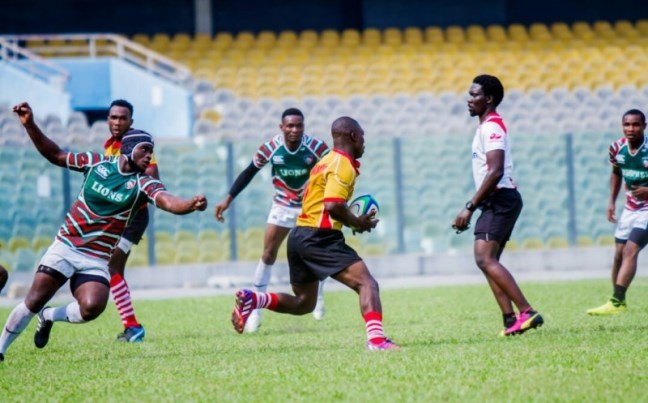 He added that Conquerors will carry the momentum into the finals.

Ms. Rafatu Inusah, Ghana Rugby’s Women’s Representative on the Ghana Rugby Football Union (GRFU) Board, said that it was indeed a historic occasion for Ghana Rugby and maybe for World Rugby.

“The CEO of World Rugby, Mr. Brett Gosper, very recently backed calls for all sevens global tournaments to follow the lead of the Sydney Sevens with incentives for countries that combine mens and womens events. I am not sure about this, but I believe that Ghana is the only World Rugby Union that plays both its men’s and women’s domestic competitions within one tournament structure and on the same days and venues,” Ms. Inusah said.

The 2017/18 GRCC finals will be held at the Accra Sports Stadium on either 10th or 17th February 2018. A final decision on this will be announced in the next week.