Sir Elton John ‘in shock’ after his mother dies aged 92

Sir Elton John says he is “in shock” after the death of his mother, Sheila Farebrother, just months after their reconciliation.

“So sad to say that my mother passed away this morning,” he said on his Facebook page, alongside a photo of them together.

“I only saw her last Monday and I am in shock. Travel safe, mum. Thank you for everything.”

Sir Elton, who was born Reginald Dwight, was an only child.

Although his father – a flight lieutenant in the RAF – was a trumpeter in his spare time, it was his mother who ignited his love of pop music.

An avid record collector, she brought home music by artists such as Elvis Presley and Bill Haley and supported Sir Elton throughout his career.

But they fell out over a “petty” argument in 2008, when Sir Elton asked her to sever ties with two old friends, Bob Halley and John Reid.

Mr Halley had worked for Sir Elton for three decades, first as a driver then later as a personal assistant, before he resigned as part of a series of changes Sir Elton was making to his team.

Mr Reid, who had been Sir Elton’s manager and briefly his lover, helped the musician become one of the world’s most famous – and richest – performers, but they too fell out. 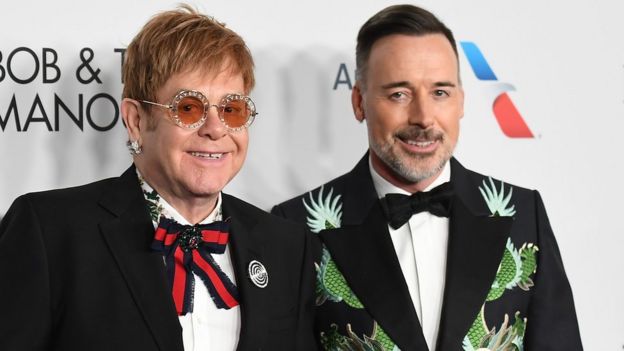 I told him: ‘I’m not about to do that and drop them,'” Ms Farebrother told the Daily Mail.

“Then to my utter amazement, he told me he hated me. And he then banged the phone down. Imagine! To me, his mother!”

Ms Farebrother told the newspaper at the time that she had never met her grandsons Zachary and Elijah, who Sir Elton and his partner David Furnish fathered through IVF with an American surrogate mother.

Her son got in touch soon after, sending her white orchids to celebrate the milestone.

But their relationship was still strained. Sir Elton told Rolling Stone that his mother had not called him to say thank you after the bouquet arrived.

However, the pair appear to have fully reconciled this year, after Sir Elton recovered from a potentially fatal bacterial infection.

“Dear Mum, Happy Mother’s Day!” he wrote on Instagram in February. “So happy we are back in touch. Love, Elton xo”