The Minister of Interior, Ambrose Dery has said that the government is working towards addressing the inadequate number of police officers who maintain security across the country.

According to the Minister, the country’s current police force consists of 23, 000 officers with a ratio of one to 848, which he added, was well below the United Nations’ minimum ratio of one police officer being responsible for every 5oo citizens.

[contextly_sidebar id=”FLZQbMwSq07ZjRSMHAIuBMcnWR7k4vCo”]He also stated that the police required a total number of 56, 000 officers to cover the entire current population.

“The Ghana Police Service at the time they took office, suffered a personnel deficit. We have a little over 23, 000 personnel. We, therefore, suffer a deficit of 23, 000 and accordingly we do not make the mark of the UN minimum police to population ratio of one to five hundred. In fact, the ratio in Ghana is one to eight hundred and forty-eight,” Ambrose Dery said.

He, however, added that the President was working towards addressing the current deficit while also offsetting the police service’s current challenges to ensure that their security efforts in the meantime aren’t affected greatly.

“The President is taking steps to make sure that this deficit, first is addressed and also to ameliorate the impact of the deficit on the operations and effectiveness on the Ghana Police Service,” he said. 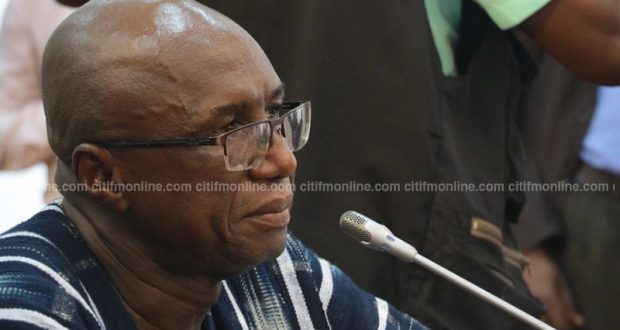 Over the years there have been several complaints from residents in certain parts of the country over the lack of police visibility, leading to increased criminal activities in those areas.

Some communities have even had to build their own police posts and pay to have officers provide some level of security.

There have also been concerns raised about the responsiveness of the police to emergency situations, with inadequate personnel and resources often attributed to delayed police reaction.

However, the Police have assured Ghanaians of increased surveillance this festive season with the deployment of 14, 200 police officers across the country to enforce law and order.

“We are deploying over 14,200 personnel across the country directly, and specifically for the Christmas and New Year operational duties. At the National operational level, we are putting across 1,200 from the National Operational department, the Counter-terrorism unit, the SWAT unit, RDF, FPU, special protection unit and another specialized unit of the service to go across the country and support all the regional commands and ensure that we bring sanity to our communities,” he said.

The police are also engaging in a number of other proactive measures ahead of the festive season: