William Owuraku Aidoo, a Deputy Minister of Energy who was on board the Starbow plane that crashed on Saturday at the Kotoka International Airport, has suggested that there was some negligence on the part of the pilot.

According to him, the pilot tried to brave the obvious storm that the plane was caught up in.

The crash, which is said to have resulted in one injury, occurred after the aircraft skidded off the runway during its take-off run.

A statement from the Emergency Operations Centre of the Airport, said operations are continuing as normal as  investigation is carried out into the incident.

The statement, however, made no mention of the storm as stated by the Deputy Minister, who also said he saw five injured persons, contrary to the KIA’s claim that only one person got injured. 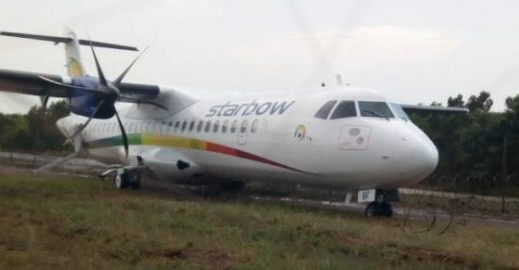 “As we were boarding the bus to the aircraft, I got a little concerned. I noticed the rains had started from afar approaching where we were parked” Mr. Owuraku Aidoo told Ghana Web.

Without making any definite statements on the matter, he said the pilot was probably trying to get airborne before the storm reached the airport.

“I am speculating that probably, the pilot tried to beat the oncoming clouds that were rolling in, and we taxied to the runway and the rain really caught up with us. So he stopped, prior to taking off proper, and I got more concerned because I could see that the rain was running down the windows very very fast when the plane was stationary, which signified to me that the wind was on the high side,” the minister recalled.

“When the pilot was about to take off, I said said to himself, wait a minute, is this guy going to take off in this weather?”

“A few seconds later after taxing, we were blown off the runway, literally, completely, for about 80 metres, and I think the plane rested on the perimeter fence,” Mr. Owuraku Aidoo said.

There was some panic within the aircraft at the time, and he said there were a few people screaming.

According to him, some five persons were taken to hospital for medical treatment.

In 2015, passengers on board a Tamale-bound Starbow airline, had the scare of their lives when the aircraft, BAE with registration 9GSBB, crash landed in Tamale although no injuries were recorded.

In 2014, two people were injured after a Takoradi bound Starbow aircraft made an emergency landing.

The Ghana Civil Aviation Authority and other stakeholders in the aviation sector, have often been criticized for not cracking the whip enough on these airline operators, hence putting the lives of passengers at risk.