The Public Utility Workers Union (PUWU), wants government to institute a thorough investigation into the various roles played by public officials who negotiated the agreement for the construction of a Water Desalination Plant at Teshie in the Greater Accra Region.

The investigation is to ascertain whether the GWCL and Ghanaians were not short-changed in the deal.

[contextly_sidebar id=”dGa50ezlWZN9dhGOEq9rxzfGgkvpiZ9w”]According to PUWU, the project, which was signed between the Ghana Water Company and an engineering firm; Messrs Befassa has “seriously weakened the capacity of GWCL to deliver on its mandate.”

Explaining the current challenges the company is battling with due to this project, PUWU explained in a statement that “GWCL buys water from the desalination plant at GHC 6.50 per cubic meter, and sells it to customers at the PURC approved tariff of GHC 1.50”, leaving a “GHC 5.00 loss” for the GWCL.

It added that the “GWCL pays the invoice amount in US Dollars even though it sells the water in Ghana cedis, thereby accumulating more losses as a result of exchange differentials.”

Another strange provision in the contract, according to PUWU “is the price indexation which is tied to local inflation although the invoice and payment to the private operator is in the United States Dollars.” 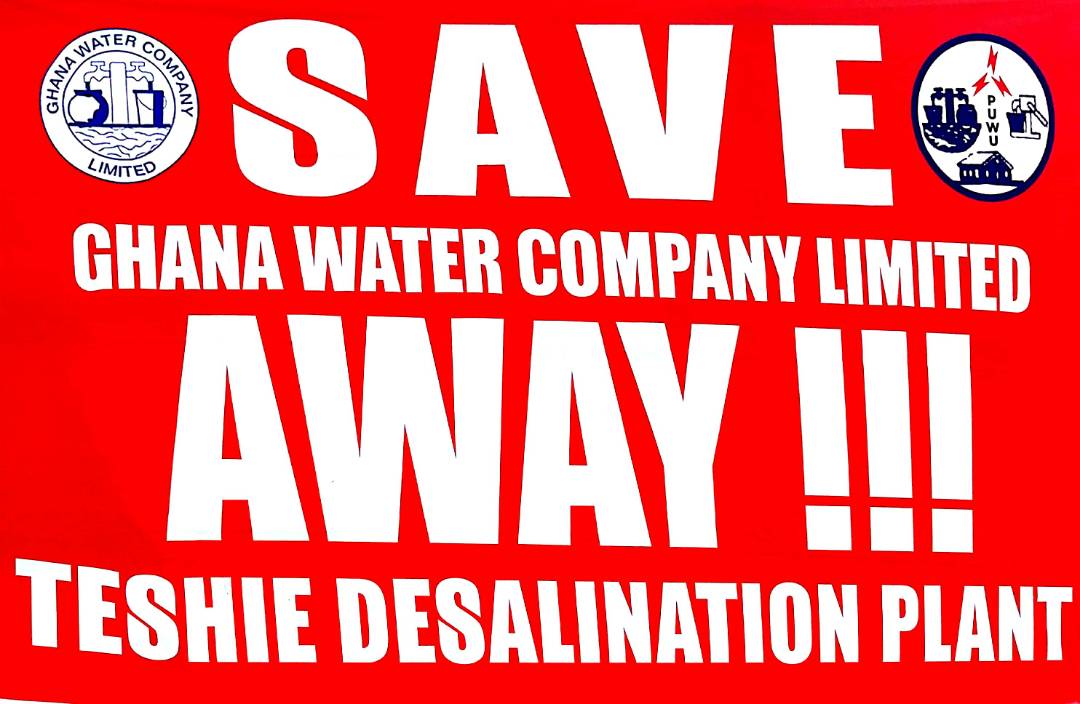 These expenditures according to PUWU, has left GWCL in a “precarious position” affecting its cash flow operations and expansion works.

According to PUWU, “there is no doubt that this agreement between GWCL and Messrs Befessa is not only obnoxious, but also “beats common business sense as it appears to be a case of a giant conspiracy between foreign investors and their local collaborators and some public officials, with political influence, to loot the public entity like GWCL and share the proceeds among themselves under the guise of a private sector investment or private public partnership.”

PUWU has also called on government to “take over the financial commitments and transaction losses suffered by GWCL” in the purchase and sale of water from the desalination plant, to save the company from potential collapse.

In 2011, the Government of Ghana awarded a contract to Befesa Desalination Development Ghana for the establishment of the sea water treatment plant to produce clean water, which will be channeled into the pipelines of GWCL.

Messrs Befesa Limited, an engineering firm, was contracted by the government to build the desalination plant, operate to defray its cost, and hand over to the GWCL after 25 years.

The project was executed by Abengoa, a Spanish company, and Sojitz Corporation, Japan’s largest importer of rare earth metals.

The two hold a 94% equity in the project. The plant was designed, constructed and is being operated by Befesa Desalination Developments Ghana, a joint venture of Abengoa Water Investments Ghana, Daye Water Investment (Ghana), and their local partner Hydrocol.

What were the issues?

Some industry insiders had told Citi News that there was no need to have established the Teshie Water Desalination plant because around the same time, the Kpong Water Treatment plant was being expanded to supply over 40 million gallons of water to the Accra East Region.

It was estimated that at its peak, the Kpong Plant could produce about 80 million gallons of water per day, and that could take care of consumers in the catchment area. The retrofitting of the Kpong Plant cost the taxpayer about $273 million.

However, a strong case was made for the Teshie Desalination plant with reference to the fact that the demand for the catchment area stood at 160 million gallons of water a day. Therefore, the government gave the project the needed push to see its execution.

Resistance to the project

The Teshie and Nungua areas have had water challenges for years and because of inadequate water volumes, the Ghana Water Company Limited for years undertook water rationing.

The introduction of the Desalination plant was to ensure 13 million gallons of water was produced per day, to eliminate rationing and ensure consumers got quality and affordable water.

But a bigger problem persisted for GWCL, which is the off-taker under the Water Purchasing Agreement between Ghana and Befesa.

This arrangement meant that the GWCL was losing about GHc 5 for every cubic meter of water sold from the Teshie Desalination Plant.

Citi News’ checks had also indicated that the  GWCL was losing GHc 6 million monthly by operating the Desalination Plant.

The checks showed that the GWCL was making payments of GHc 8 million a month to the financiers of the project, although it made only GHc 2 million by supplying treated water from the plant.