Traders at Abofour in the Offinso Municipality of the Ashanti Region are protesting moves to relocate them to a newly constructed market in the area.

According to the traders, the basic amenities needed for the market to function effectively, were not in place hence their refusal to move.

The traders have also cited insecurity as one of the major reasons why they are refusing to relocate. 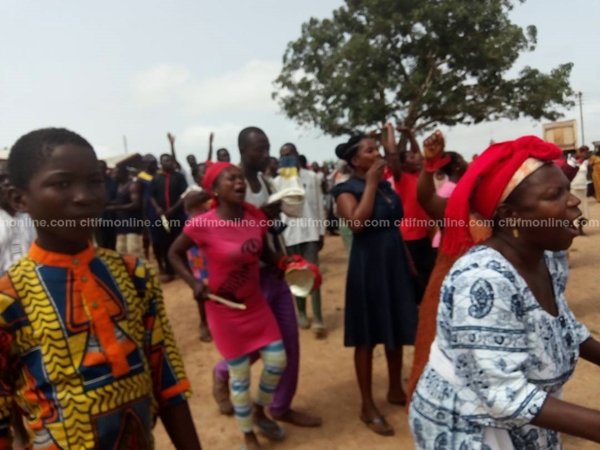 Tensions were high when over 10 military personnel stormed the area on Wednesday following the refusal of the traders to relocate to the newly constructed market.

The military were said to have vandalized structures of traders that have been erected by the roadside at the old market.

The military also arrested four persons and handed them over to the Offinso Police command.

The military had gone to the area on the orders of the Ashanti Regional and Offinso Municipal Security Councils, after the aggrieved traders threatened to attack the MCE for the area, Solomon Kesse over the relocation exercise.

The traders have vowed not to relocate to the newly constructed market if the Assembly fails to ensure it is conducive for business activities, as about 400 of them poured onto the streets to protest the relocation exercise.

One of the traders who spoke to Citi News said “any market must have infrastructure like a hospital, a police station… there are no security agencies over here. Where are the police? You cannot compare this market to others” she lamented.

Another trader said: “where the toilet is located is not even the best. We have faced series of attacks by thieves in this market so we can’t trade here. They even don’t have water here.”

Traders must move before development starts

The Assembly has however justified its decision to relocate the traders, saying efforts are underway to complete the market.

Joe Daffour Jnr, the Information Officer at the Offinso Municipal Assembly, told Citi News that “as we speak, the market women themselves are aware that the Assembly has employed more than necessary watchmen to take care of their route.”

Other issues like the fencing of the area, will be addressed once they have moved into the new market space, Mr. Daffour said.