Management of Shaanxi Mining Company operating in the Gbane area of the Talensi District of the Upper East Region, have warned that illegal mining activities in the area could lead to more deaths if urgent steps are not taken to cover all illegal mining pits as directed by the Minister of Lands and Natural Resources, John Peter Amewu.

Even though a directive was given by John Peter Amewu for all such pits in the area to be closed, the directive is yet to be adhered to hence their call.

On Friday 7th April 2017, seven illegal miners died when they were trapped by smoke in their attempt to steal ore from Shaanxi mining through one of the Galamsey kingpins Akwasi Appiah, who has since been arrested. 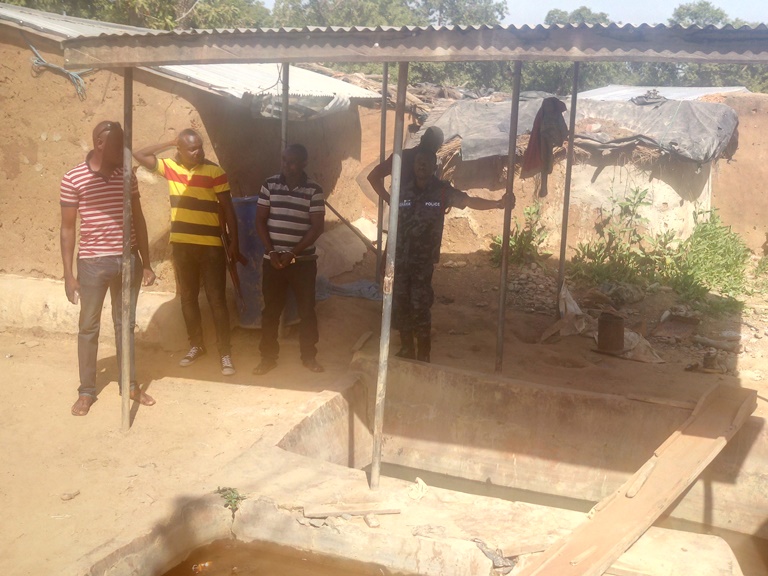 The galamsey kingpins usually construct illegal mining pits, fence and lock them up, and only open them at night.

They then engage the services of the youth who find their way into the mines of Shaanxi mining limited to steal gold ore.

Citi News uncovered this when one of the key players in the galamsey business,  Akwasi Appiah, also known as Kwesi Bantama, was arrested by the Bolgatanga police, during which he led them to his illegal pit in Gbane.

“There are three illegal pits constructed by Akwesi Appiah known as Kwesi Bantama, Issifu and Kofi Machio in their homes, and they have connected their pits into the underground of our mine. This kingpin on daily basis engage the services of residents aged 12 years and above, to go through their pits to Shaanxi mine to steal our ore, blasts our support pillars with  which we prevent collapse of the underground, and also brutalize our underground workers with guns and other weapons.”

“Their activities have caused a loss of production and a reduction of our ore mine, and it’s putting their own lives and the lives of our workers in danger” he noted.

Mr. Peter Amewu on August 10, 2017, directed the Upper East Regional Minister, Rockson Bukari, and the Regional police commander, DCOP Vincent Redeemer, to ensure that all illegal pits in the area are sealed. But Rockson Bukari says a committee has been constituted to come out with modalities for the closure of the pits.

But Shaanxi mining company’s Human resource manager, Joseph Anokye, fears more deaths will be recorded if all the illegal pits in the area are not sealed immediately.

“We have relied on the regulation authorities and agencies to resolve this illegal pits issue. We have written several letters to these agencies, and recently when seven young people died trying to steal ore in our underground. The sector minister, John Peter Amewu, came to this mine and instructed that, the Regional Minister Rockson Bukari and the Regional Police commander DCOP Vincent Redeemer should ensure the closure of these illegal pits  which to us is the solution to illegal mining in this area.”

“…But regrettably enough, up till now, the illegal pits are still active and are being used to continue illegal activities in the area”.

Meanwhile, Mr. Akwasi Appiah, the galamsey kingpin, has declined to comment on his arrest.