Security has been tightened in Kenya as voting gets under way in a re-run of the presidential election which is being boycotted by the main opposition.

Kenya’s President Uhuru Kenyatta, who is seeking a second term, has urged people to vote and remain peaceful.

Opposition leader Raila Odinga, who has pulled out of the election re-run, has called on his supporters to boycott it.

Mr Kenyatta was announced the winner in an 8 August vote but the poll is being held again because of “irregularities”.

The polls on Thursday opened at 06:00 (03:00 GMT) with tens of thousands of police and other security personnel deployed to protect voters and polling stations.

One voter in Nairobi’s Mathare slum, taxi driver David Njeru, 26, told the AFP news agency: “It is my duty to vote. Last time the queue was all around the block and I waited six hours to vote, this time the people are few.”

On the eve of the vote, Mr Kenyatta urged people to cast their ballots: “Our forefathers fought and died for the right of the African to vote, we dare not reject this inheritance.”

As the polling stations opened their doors, opposition protesters attempted to block roads in parts of Nairobi’s Kibera slum, with riot police using tear gas in a bid to disperse the crowds. 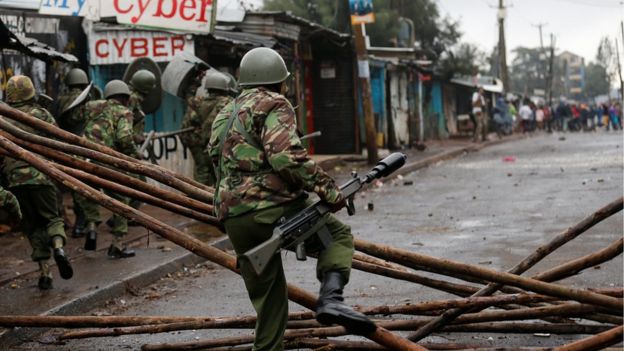 The announcement by the Independent Electoral and Boundaries Commission (IEBC) of Mr Kenyatta’s victory on 8 August led to inflammatory rhetoric and attacks on the body.

Last week, a senior member of the IEBC fled to the US amid death threats.

About 70 people have been killed in violence since Mr Kenyatta was declared the winner in August’s election.

Mr Odinga had wanted the repeat ballot to be held at a later date, but a bid to delay the election re-run fell apart after only two out of seven Supreme Court judges attended a hearing on Wednesday.

One judge, Deputy Chief Justice Philomena Mwilu, failed to appear after her bodyguard was shot and wounded by unknown gunmen on Tuesday.

What went wrong in August?

Kenya’s Supreme Court took the unprecedented decision to annul the August presidential election and demand a re-run in September citing “irregularities and illegalities”.

Chief Justice David Maraga said the election had not been “conducted in accordance with the constitution” and declared it “invalid, null and void”.

He said the verdict, which was backed by four of the six Supreme Court judges, found that the IECB had committed irregularities “in the transmission of results”.

The court said the result was “neither transparent nor verifiable”.

The court ruling did not attribute any blame to President Kenyatta’s party or campaign.

The ruling raised tensions, with rival protests in support of and against the court.

There were running battles between police firing tear gas and stone-throwing protesters in the city of Kisumu, an opposition stronghold, on Wednesday.

‘We want a better election’

Mr Odinga has said that the IECB has failed to make the changes needed to prevent a repeat of the mistakes that marred the earlier poll, although the IECB disputes this.

His opposition coalition – the National Super Alliance (Nasa) – made clear its participation in the election was contingent on reforms being made. 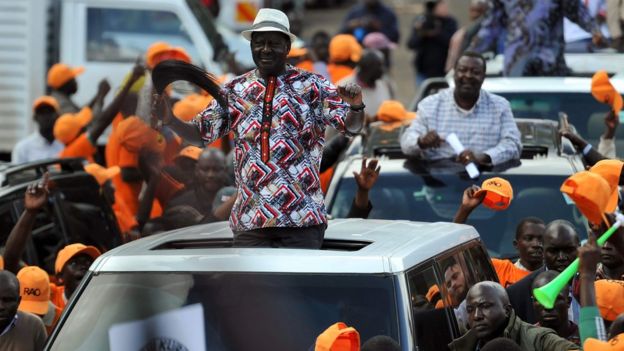 Mr Odinga has vowed to disrupt Thursday’s vote and has called for “massive” demonstrations, but asked his supporters to stay away from polling stations in an attempt to avoid violent clashes.

In a statement earlier this month, he accused the government of instituting a “dictatorship”, adding: “We are going to win the battle for a free and fair election”.

“Our opponents want an election for the sake of it, we want a better election,” he said.

Banks to cut back lending to energy sector