The Member of Parliament for Bolga Central, Isaac Adongo, has described the reasons given by the yet-to-be issued energy sector bond as baseless.

According to him, claims by the government that the bond was needed to service the non-performing loans of banks were untenable, as the previous administration had ensured that the debts were being serviced.

[contextly_sidebar id=”8lbfOMUascCJdmP0W0pK4iNrGUPnACA1″]Speaking on the Point Blank segment of Eyewitness News, Isaac Adongo explained that, the Mahama administration had negotiated with the banks to restructure the energy sector debts, and a decision had been taken to end the long-standing subsidies that had been provided to the energy sector companies like the Electricity Company of Ghana and the Volta River Authority.

“All the way back in 2015, a process was started to restructure these debts. We are all aware that as a result of a series of subsidies right from the time of Jerry John Rawlings, through the tenures of Kufuor and Professor Mills. At some point, it was costing us about two billion a year just on subsidies, and we needed to cut it at some point. John Mahama took a bold decision to stop the subsidies, and take stock of where we were in terms of our inability to fund the subsidies to the energy sector companies such as ECG and VRA. That process led to us engaging the banks to renegotiate and restructure those debts so that government will take a decisive step to ensure the debts were serviced,” he said.

“As a result of the process, the interest rate on the dollar component of the loans came down from 12% to 5%, and the interest rate of the cedi component came down from 38% to 22%. We agreed the establishment of an Escrow account managed by the participating banks, the Bank of Ghana and the Ministry of Finance into which the receivables from these companies would go into as a first priority. The second was to get Parliament to pass the Energy Sector Levy Act, that was described in various terms as a nuisance tax and that the President referred to as the reason why electricity tariffs were higher than rent. We ensured that from the proceeds from the loans were now being serviced as restructured.”

Isaac Adongo insisted that, the then government’s efforts had resulted in a turnaround in the rate of the non-performing loans, with banks recording a drop of 2% in the last three months of 2016.

This he said negated the government’s arguments, as the fact that the debts were being “consistently serviced” meant that the loans were no longer non-performing.

“The [NPP] government is quite desperate and the desperation is informed by what they term as the urgency to deal with the Energy sector debt in the banks to the extent that they feel that is creating a problem for non-performing loans and a challenge for the banks. I think that they are trying to create an excuse that only exists in their minds.”

“The Monetary Policy Committee’s own report at the end of January 2017 for the year ending 2016, made it quite clear that the non-performing loan portfolios of our banks began to decline from 19% in October to 18% in November, and to 17% in December. This excluded an amount of $165 million that was disbursed in December from the ESLA. As a result, you cannot describe a loan that has been serviced to date as non-performing. How else does a loan perform?” he queried.

Government is reportedly targeting at least 19 percent interest rate on the energy bond to be issued to clear the debts in the energy sector.

This is relatively higher compared to the estimated 18 percent rate on the ten-year domestic bond.

Sources close to the bond issue also indicate that, the corporate nature of the energy bond has influenced the decision to peg anticipated interest rate above that of the current ten-year domestic bond issued by the government of Ghana, which is estimated at 18 percent. 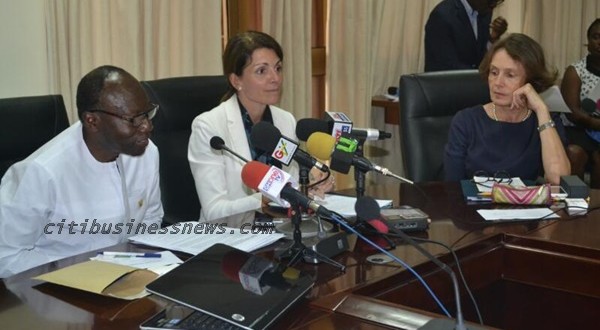 The IMF and government are expected to reach an agreement on the mode of issuing the bond this week, which should also clear the way for the issuance of the energy bond by close of this week.

An earlier statement on the bond indicated that, the first tranche is expected to raise 6 billion cedis; the equivalent of 1.3 billion dollars.