Citi News checks indicate that the GWCL makes payments of GHc 8 million a month to the financiers of the project, although it makes only GHc 2 million by supplying treated water from the plant.

The plant has the capacity to desalinate 13 million gallons of seawater a day.

More generally, desalination refers to the removal of salts and minerals from a target substance, as in soil desalination, which is an issue for agriculture.

In this case however, saltwater is desalinated to produce water suitable for human consumption. One by-product of desalination is salt.

In April 2015, the Plant was commissioned by Former President John Mahama to process sea water into potable water for consumers in Teshie Nungua and surrounding areas. It is estimated that it serves 500,000 people with an estimated 13 million gallons or 60,000 cubic meters of water. 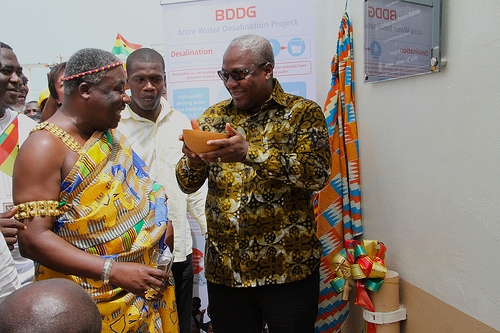 The water desalination project falls under the Accra East Region of the Ghana Water Company’s operations.

In 2011, the Government of Ghana awarded a contract to Befesa Desalination Development Ghana for the establishment of the sea water treatment plant to produce clean water, which will be channeled into the pipelines of GWCL.

Messrs Befesa Limited, an engineering firm, was contracted by the government to build the desalination plant, operate to defray its cost, and hand over to the GWCL after 25 years.

The project was executed by Abengoa, a Spanish company, and Sojitz Corporation, Japan’s largest importer of rare earth metals.

The two hold a 94% equity in the project. The plant was designed, constructed and is being operated by Befesa Desalination Developments Ghana, a joint venture of Abengoa Water Investments Ghana, Daye Water Investment (Ghana), and their local partner Hydrocol.

The total cost of the project is known to be $126 million. The project is a Build, Operate, Own and Transfer project spanning a period of 25 years, with a revenue forecast of about $1.3 billion dollars over 25 year period.

This public-private partnership arrangement will see Abengoa operate the plant for 25 years, and then transfer its management to GWCL.

The World Bank’s political risk insurance arm, the Multilateral Investment Guarantee Agency (MIGA), gave an investment guarantee of $179 million dollars to the project. This was to cover the equity investment and shareholder loan of Abengoa and partners, and a non-shareholder loan and interest-rate swap by Standard Bank Group of South Africa.

What are the issues?

Some industry insiders have told Citi News that there was no need to have established the Teshie Water Desalination plant because around the same time, the Kpong Water Treatment plant was being expanded to supply over 40 million gallons of water to the Accra East Region.

It is estimated that at its peak, the Kpong Plant could produce about 80 million gallons of water per day, and that could take care of consumers in the catchment area. The retrofitting of the Kpong Plant cost the taxpayer about $273 million.

However, a strong case was made for the Teshie Desalination plant with reference to the fact that the demand for the catchment area stood at 160 million gallons of water a day. Therefore, the government gave the project the needed push to see its execution.

Resistance to the project

The Teshie and Nungua areas have had water challenges for years and because of inadequate water volumes, the Ghana Water Company Limited for years undertook water rationing.

The introduction of the Desalination plant was to ensure 13 million gallons of water was produced per day, to eliminate rationing and ensure consumers got quality and affordable water.

But a bigger problem persisted for GWCL, which is the off-taker under the Water Purchasing Agreement between Ghana and Befesa.

This arrangement meant that the GWCL was losing about GHc 5 for every cubic meter of water sold from the Teshie Desalination Plant.

Some of the monthly costs to the Ghana Water Company include an estimated GHc 1.5 million electricity bill.

The GWCL is currently unable to pay the Electricity Company of Ghana, which is also struggling financially.

The other cost element is the capacity charge, and from Citi News’ analysis, the GWCL owes Befesa an amount of about $80 million.

In November 2015, months after the plant started operations, the GWCL revealed to Citi News that it owed Befesa GHc 43m.

Only 3 of their 89 urban water supply systems are breaking even and making some good money. These three, Barekese, Weija and Kpong, are basically working to subsidize the operations of the others, according to Citi News’ research.

Any Water Purchasing Agreement which burdens the company financially puts a stress on the nation’s water company and may have dire implications.

The Government of Ghana and the Ghana Water Company have two options out of the many available to them in this situation.