A development as simple as ensuring direct flights between Benin and Ghana, will be critical to entrenching the bond between the two countries, and strengthening the ECOWAS community, in President Nana Akufo-Addo’s view.

Speaking on Wednesday when the President of Benin, Patrice Athanase Talon paid a day’s working visit to Ghana, President Akufo-Addo said, “We should endeavour to establish direct flights between Accra and Cotonou to facilitate the movement of persons and goods. We should further try to establish direct shipping lines, linking Accra to Cotonou, to facilitate trade between us. We need to push for the Sealink Shipping Project, an ECOWAS initiative, to help link our two countries.” 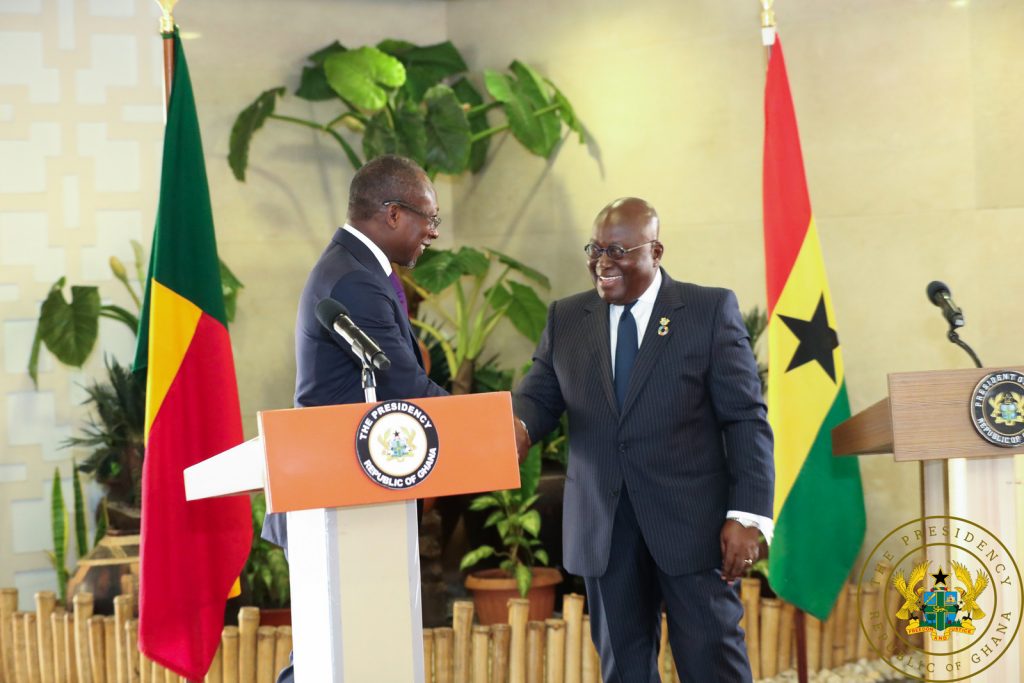 “With West Africa’s population set to reach some 500 million people in 20 years time, there are immense opportunities to bring prosperity to our region with hard work, enterprise and creativity,” the President added as an indication of the prospects for the sub-region.

President Akufo-Addo, however bemoaned the fact that only one meeting of the Permanent Joint Commission of Co-operation (PJCC), has been held, despite the good relations that exist between the countries.

A preliminary Memorandum of Understanding (MoU) was signed in 2016, after Benin requested assistance in the exploitation and exploration of hydrocarbons, reactivating the Permanent Joint Commission for Cooperation.

Other areas of cooperation, per the MoU, include fisheries, security, communication and education, among other sectors.

President Nana Akufo-Addo stressed that, there is the need to “reconvene another session of the PJCC, and I propose that we hold the next meeting in Cotonou as soon as possible.”

“Not only will the PJCC serve as a platform for enriching commercial relations between our countries, it will also facilitate the implementation of regional instruments such as the Common External Tariff of ECOWAS,” he said.

He also assured that, Ghana will continue to co-operate with Benin within other multilateral frameworks, such as the Volta Basin Authority, to promote and safeguard the equitable sharing of common water resources of the Authority.